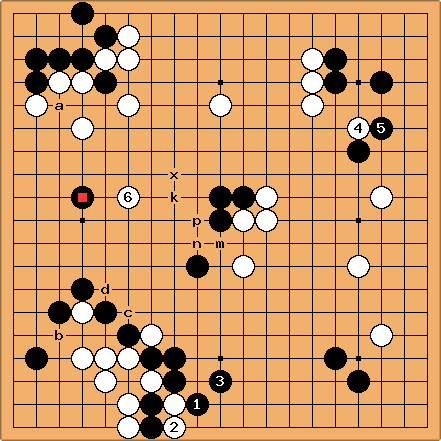 AvatarDJFlux: I too very much wanted to switch to this area instead of continuing locally in the UR corner. I would have picked up the point k in place of

, though, just for the sake of spoiling the shape of Black's center stones.
What do stronger players think?

Charles Matthews Tell me whether Black is strong or weak on the left side; and then I'll tell you what I think.

DJ: Oh my gosh! this is a difficult question for a weakling like me! I'll try to reason...
Black's LS is open at the skirt, and White could venture to play some kikashi around c and d (maybe after having played at b, followed by Black capturing

).
Would this be enough to threat a cut of Black's Keima in the center (with

at k: W m, B n, W p)??!?
If you ask me whether Black stones in the center are stronger than their allies on the side, the center ones do look stronger (even if White center stones look even stronger to me, not having the weakness of the Keima). In this case, HolIgor move should be correct, being further away from strength...
Then there are a number of questions:
- should White erase Black area from this direction?
- should White erase Black area from the center down to the

? (But this could provoke Black taking the LR corner)
-should have White continued in the UR corner?

Charles If this is an area where Black is strong, probably White can't achieve very much. If Black is basically strong here, but White has some forcing plays - are they kikashi or aji keshi? I think White is strong locally, which implies White would like to fight. Kikashi against strong groups - we have a page about that, but it's really a misleading idea, in the sense that such kikashi often turn out to be gote (strange ...). I see that page is called play away from thickness - something to think about. Anyway Black has been strong here in the centre since about Black 7.

DJ: Ought I therefore to understand that, as a Keshi move,

as played by HolIgor is better than at k, as the former can have FollowUp's (for instance contact plays against the marked black stone), while the latter cannot threat much against the center stones?
What about the relative merits of Keshi here, or toward the

, or continuing in the UR corner?
I apologise for being such a pain you-know-where, but that's the lot of being strong.... ;-)))

Charles I have to confess that I was applying a little of the Socratic method there, to go teaching. First time since 1974, I think. Not a success then, either.

I like Holigor's play better than k. White k, Black x, I'm nervous of fighting breaking into the upper side.

DJ: Thank you, Charles, a good lesson, as usual%%% I have nevertheless to apologise, for having disappointed your maieutics... But that's the lot of weak players, to disappoint strong ones! ;-)

Charles The truth is that Black has a strong position on the left, with some flaws in it. As a general rule one should play in a tactful way in such an area, probing for weaknesses.