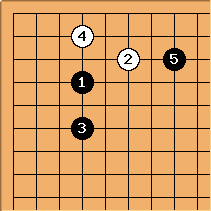 This page deals with the joseki that exist after

in this diagram. The main variation of the joseki requires a ladder; if the ladder does not work, black has to play a less common variation. 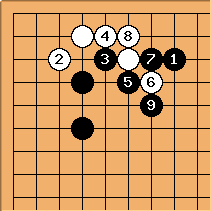 , black is trying to get outside influence in exchange for white territory in the corner, and the most common variation for white is to get along with black's plan with 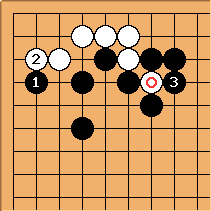 For white to run out with the marked stone when the ladder does not work for black is a big threat, Thus, usually black will capture with

at an early stage. Black in turn can somewhat close off the left side by exchanging 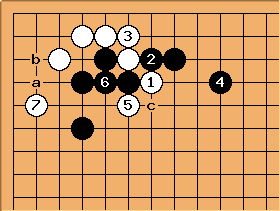 If the ladder does not work for black, setting up a position with

is most common. White creates aji with

, then stabilizes her group with

. If white plays tenuki with either at those moves, black will aim for the black a-white b exchange again. After

, black c is thick but slow. 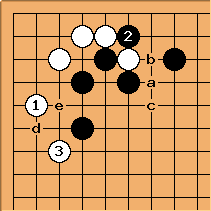 If the left side is important, white might play

here instead of a. After black stabilizes the upper side with

, white can continue at

or play tenuki. White a- black b - white at

has also been played. Another possibility is

at d, black 2, white e, which is slower but more solid. 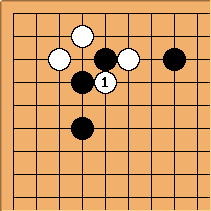 , white turns the tables on black, now it is white who is most likely to take the influence. However, this move requires a ladder. 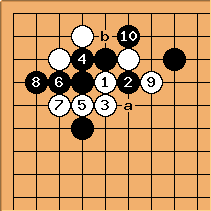 , white sets up the ladder, but to take it immediately would be wrong and give black more territory than he is entitled to. White first forces with

before playing the ladder with

. White has succeeded int taking influence, but black's corner is not small either. 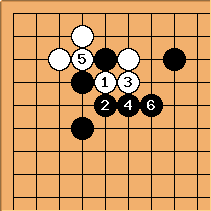 , black can take the outside. White does however get a larger corner than in the main joseki. Black's first chance comes immediately with 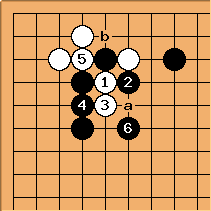 The second possibility is with

. Black will probably strengthen his position with black a-white b. 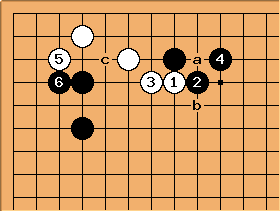 , attaching on top of the squeeze play with

, black has a choice of answers. Apart from

has been played at a and c.