This is the base position I faced in a 3 stone game (I was white) against a 12k recently. It's not really what I expected out of a 12k :). My plans were based on a response at a, not 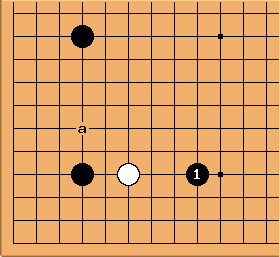 What I played didn't seem very good, I did keep outside influence which I wanted, but black seems to strong especally after

looks problematic too. Direct 3-3 invasion is going to leave Black with lots of influence that works well with his pincer and his star point stone. 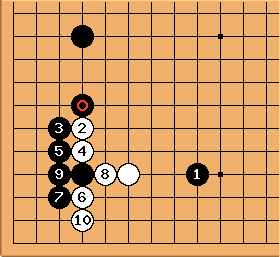 This doesn't look good to me either... Black has much too large a corner. 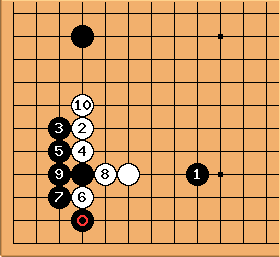 I am finding it difficult to come up with sequences that are attractive for white. 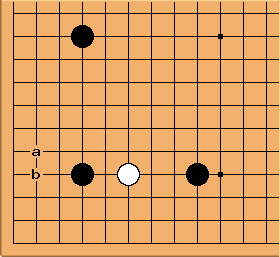 HowToLose?: Perhaps submarine on the far side?

Chaz (10 kyu): I became interested in this position because I played this pincer, coincidentally, as B while I was 12 kyu. After studying this scenario, I wouldn't expect a good result for white here. Only giving up the corner in the face of a two-stone disadvantage seems like a relatively good result. 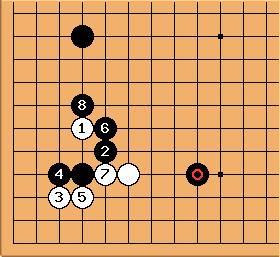 seems like the strongest move. Pincered from both sides, white can only save one group, with the marked stone well placed to limit white's expansion. This seems too good for black. 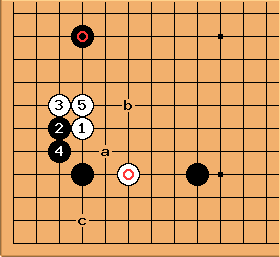 is passive and happily so for white. While more risky because of black's future cut at a, I think

here is a reasonable response to

, menacing black's top stone and maintaining (albeit much weakened by black's surrounding stones) outside emphasis. If black later cuts at a, White has plenty of options. Play at or around b would threaten to escape white's stone and gather strength for an attack on black's top stone.

sinprejic A black tenuki after that sequence still leaves room for a play at c later on, which can get complicated. I think a high level player however will either reinforce immediately, or find the appropriate time to reinforce depending on the rest of the board so the pincer would probably be an over-play. The prerequisite for white c is the stability (or abandonment) of the 1,3,5 stones stones on the left side. 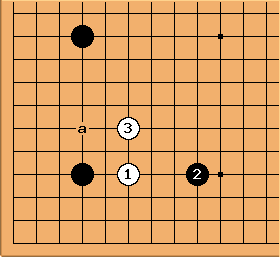 But back to the original question on how to respond to

. I would imagine white to be strong in the lower right and is trying to use 1 to develop a large framework on the bottom side, as she was in my game. Perhaps white should try a simple jump to induce playing at a as you originally intended, then attacking black's isolated stone on the bottom right. Of course black could again resist and play to strengthen

, but white has an extra stone advantage with which she can use to attack the corner.

sinprejic - Comming back to this now at 2 kyu I find I agree with this last diagram, but it's worth noting that white is playing at a disadvantage, so a good result is probably anything where white can create aji or settle the white stones quickly. In a handicap game a result that leads to a complicated fight or take sente might also be considered good, so in that case the pincer in the previous diagram might be useful too.