Representing 3-D shapes on 2-D surfaces and playing Go on it.

In this group are all those 3D shapes (cylinders, Möbius strips, Spheres, Toroids ..) which can be partially or completely represented on a 2D surface.

JohnAspinall I'm sorry, but as someone with a little bit of mathematical training, it offends my sensibilities to see these shapes called "3D" here. There are (at least) two different notions of dimension here; the important one for our discussion, which a geometer might call intrinsic, is the dimension of the space in which the game is played. The surface of a cylinder is different from (the surface of) a sphere, which is different from a torus, etc., but they are all 2 dimensional.

The other notion of dimension has to do with embedding one space in another. We embed a cylinder in 3-space so that our notion of neighboring points works all over the surface. Some 2-dimensional surfaces can't even be embedded in 3-space without crossing; it takes 4-space. You've probably heard of the Klein bottle.

As a counter-example, suppose I have a flexible, but traditional layout, goban (like one of those teaching boards that you hang on the wall). If I put a bend in the board, it takes 3-space to do that. But no-one (I hope!) is going to claim that the game of Go on that surface has changed any.

So, all these surfaces are 2 dimensional.

As an example, in it simplest form, a cylindrical goban can be imagined by connecting the left and right hand edges of the goban. This reduces the 'goban' to no corners and only two edges. This is of course perfectly playable on a normal goban, with a bit of imagination. Adding a half-twist (I.e. connecting A1 to T19) makes a Möbius strip, which cannot be represented in its entirety on a flat surface, but which a computer could easily show. (I.e. if you scroll to the left, then the pieces leaving the board on the right will appear 'upside down' on the left, etc.)

Common for all these is that play is still 2D (I.e. liberties link the points in only two dimensions).

On a slightly different note, a 'flattened' cylindrical board has been made where all 'points' have four 'liberties'. You can easily imagine it being played on a cylinder, but in addition to that, each point has four liberties, including the edge points. Check it out

RafaelCaetano: I don't understand the difference between the 'flattened cylinder' and the torus. My visualization skills suck, so what's the difference in terms of liberties? If I understand correctly, in the torus all points have 4 liberties too...

Charles Picture shows that the edge polygons are triangles.

RafaelCaetano: Ops, I see now. Sorry for the dumb question. :-) An easy problem (but possibly useful for understanding the difference between the boards): what's the minimum number of stones in an immortal group in the torus (donut) and 'flattened' cylinder?

Spazdor: On a torus, the minimum number of stones for a live group (one that is unconditionally alive and can ignore attacks, that is) is the same as for a flat goban: 10 stones. 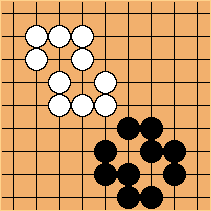 humpolec?: Torus Go is basically a board without any edges. It leads to very interesting games. I recommend playing it on a small board (9x9, 13x13). It's quite hard to make life in such a game, so there's practically no territory. Also, it's a good exercise to try to read out the situations on the edge.

Today I came across another interesting thing about torus go. I made a group that looks as if it had one eye and one false eye, but alive! 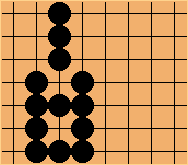 However, when you look closely, you can see that the group actually has 3 eyes because it's connected around the edges. 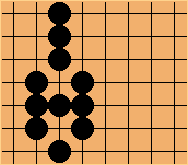 Tas: Only two eyes rigth? I can get worse, the following is alive too.