I would appreciate thoughts on the below since I don't see this variation in the library and feel I did not play optimally. I recently played a game where black played the cut on the inside and then played Atari instead of crawling (see this sequence under the "Atari" heading here:

As white, I played the normal response with an extension to "2", but black responded with 3 instead of playing at a.

The result was this with white to play: 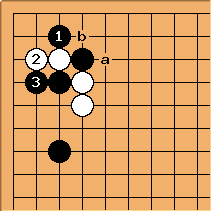 As white I responded with Atari at 4 ("b") and ended up with a small living group in the corner, plus the two weak looking stones at 4-4 and 5-4 on the outside, and feel the result could have been better for white (black to play in final diagram) 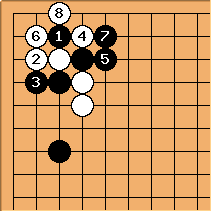 Uberdude: You should simply turn at 4, now a and b are miai so you capture one of the cutting stones for a great result. Resist the urge to always atari. 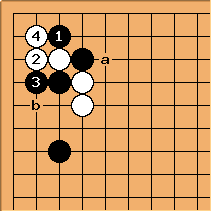 Thank you Uberdude! Can you confirm my read below? (and thanks for educating this double-digit kyu - I really appreciate it)

I think the key piece I was missing was that I was concerned that after 4, black could play 5 at c or d and short white's group to two liberties , and I would lose the capturing race. What I think I was missing is that if black plays 5 at c or d, white could then atari with 6 at e, black would have to extend the cutting stone out to a at 7, and then my group's liberties are no longer short because I can capture the stone played at 1, leaving white free to play 8 at b. 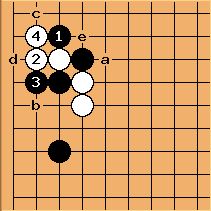 After black extends to a with 7, white can play 8 at b and capture the black group on the left regardless of whether black played 5 at c or d. 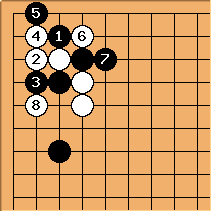 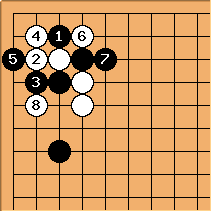 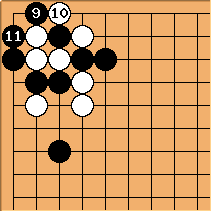