Xezlec 19k?: The advice here not to play out a broken ladder just cost me a game. It takes the color on the inside of the ladder 2 moves to capture 1 of the broken ladder's stones. It takes the color on the outside 1 move to save 2 of the broken ladder's stones. Clearly, once the smoke has cleared, the player who made the broken ladder comes out (far!) ahead, and will then use that massive new influence to spank the other player all across the board. In fact, in my case, my not-quite-laddered stones ended up getting captured eventually anyway just because my opponent's saved stones in the ladder exerted such strong pressure on everything in the region that I couldn't escape even after doing the double atari and breaking out. Maybe there is some reason for this advice, but it isn't obvious to us stupid beginners without some more explanation.

There are a few situations where a broken ladder is not bad. Here's the most famous one: YiSeTolHongChangSikLadderGame. It's also common to play three moves or so of a broken ladder as forcing moves, then go back and defend.

But I think the reason you got a bad result is that you thought that you had to capture all the individual stones from the broken ladder. That will often be too small scale.

But if your opponent starts trying to save his outside stones in the ladder, they will immediately become heavy and good targets for an attack.

As always, use your strategic judgment about which things are important. --Hyperpape

So the opponent, is spending all his moves trying to save his stones, and yet, every move or two, he is still losing stones. Meanwhile, how many of your own stones are you losing in the ladder?

None? So your opponent is the only one being captured? Sounds good to me...

More important than the captured stones themselves, though, is the *cutting and connecting*. The act of capturing a stone only gives a point or two. The true value comes from the fact that you are *breaking through* and *cutting the opponent apart*, which is worth vastly more.

For example, starting from this position... 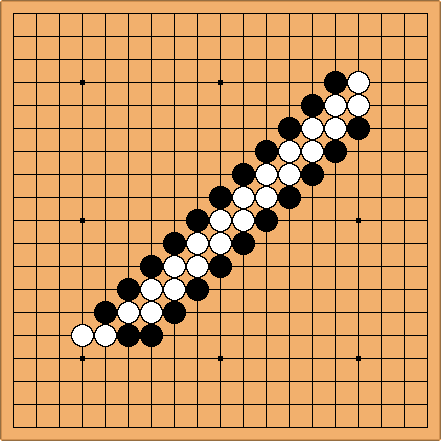 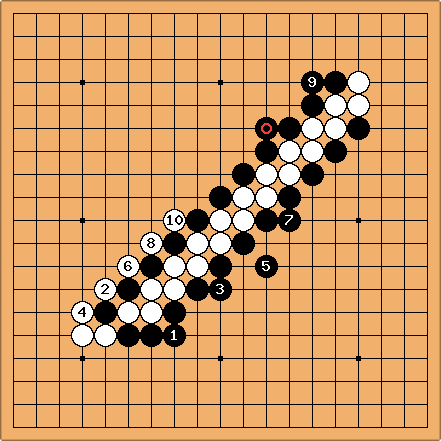 If play goes like this, where white singlemindedly simply tries to eat black's stones one by one, black ends up okay. Actually, it's still great for white overall, but black will get two fairly strong walls and it wasn't as much of a disaster as it could have been. 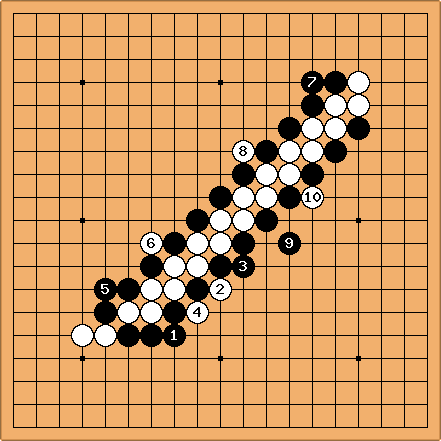 If instead white plays to break through as many places as possible and black again insists on trying to save his stones, then... 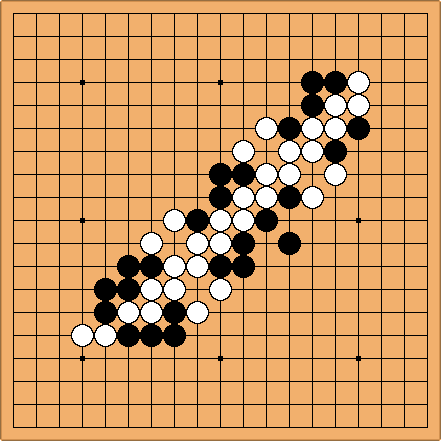 Then the board will end up looking something like this. And now this is an unqualified disaster for black. Black is cut to shreds, with 6 distinct groups on the board that are all weak. Note how many of blacks groups don't even have more than 4 liberties yet! Black has invested so many moves, and yet still his groups are by this measure still only as strong as a single stone played by itself in some empty part of the board.

Usually, if you lose a stone or two, its not the loss of the stone that makes it bad, it's the fact that the opponent cuts you apart, you become weak everywhere around, and the opponent becomes impossible to enclose again.

On the flip side, if the opponent spends moves to capture a stone that *didn't* contribute to cutting you or connecting himself, it's frequently a mistake, and you're happy he wasted the time to eat the stone!

It's all about the strength of groups and about connecting and cutting.