GNU Go is stronger than I am in some ways, so I've been playing against it a lot, mostly at 9x9 for tactical practice. I think I've discovered a weakness; it is not good at avoiding seki; I sometimes get away with things I shouldn't. Here's an example, from a 2-stone game with me black. We were here as of move 24, W to play. 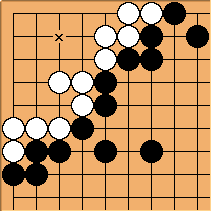 White passed, which I suspect is a blunder. I think he should cover the vital point X, but I'm not entirely sure that is necessary. That's my question.

The next few moves were: 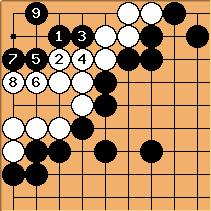 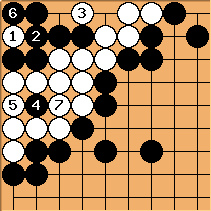 We ended up with just a large black territory plus a large seki, complete disaster for White. But where did he go wrong? The pass? Or later? 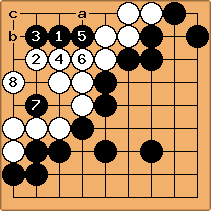 IGS 5K+: I believe Black 1 is the most important point to play and that White should waste no time in occupying the other key point, White 2.

So you are saying White's pass in the original position is OK because he can defend adequately against Black 1 later?

IGS 5K+: In this partcular situation the game is complete to my eyes and White is behind on territory. I would pass (I prefer to pass rather than resign if the end-game has already been fought).

In general there is something to be gained from defending this group because otherwise if Black generates some ko-threats elsewhere she can use them to make a seki here.

at b, and white would have to struggle to salvage even a seki. 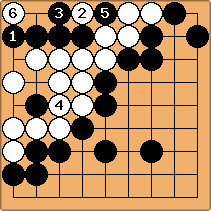 IGS 5k+: I don't see that White has any difficulties. If Black descends to

here then White can respond with

leaves Black with nothing. 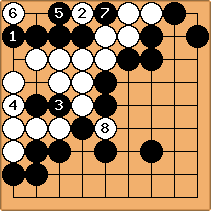 but this comes to nothing too. 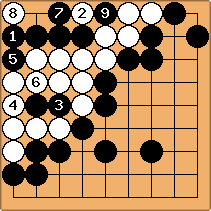 IGS 5k+: Because White has some ko-threats Black can't hope to win this ko.

Please show us if you have a stronger resistance for Black. I don't see anything better than these. 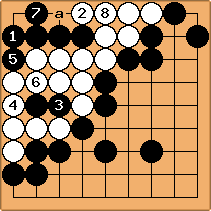 B@a looks to lead to an unfavorable ko for black (must find first threat).

. It seems you are quite right and that Black can manage a seki after all.