I (Malcolm) have seen a solution which goes as follows: 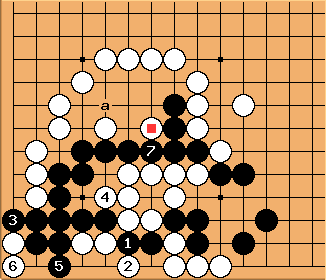 After 7 White has to live, and then Black has a tesuji at a which captures the marked stone and makes an eye. 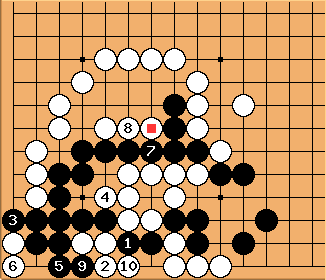 and there is no ko. (tderz: Black seems to be dead, as White is alive)

If it is black's turn, the solution is more tricky.)

However there seems to be a variation leading to Ko if White plays 4 differently: 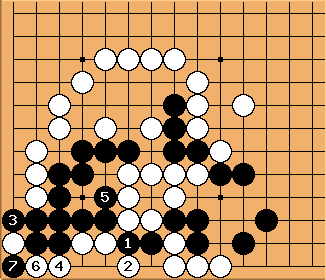 I wonder if Black can do any better...

Dave: All the necessary ideas for the solution seem to be presented above,
however, the diagram copied from the original problem page was wrong.
The marked stone is added below and will allow a true solution... 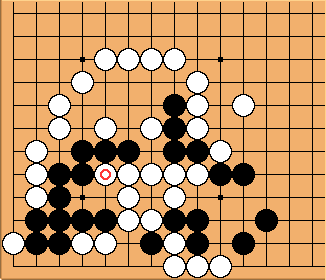 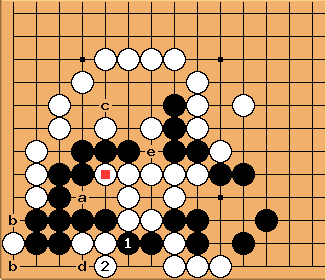 is the necessary start for all attempts for solutions.
As was shown above by (Cyrille?,

for defence by ishinoshita is strong.

There are 4 possible places for eye spaces: a, b, c, the less likely d and the cut e,
which could threaten white with death if she stays 1-eyed by not going for the ishinoshita.
Because the normal pseudo-ko oshi-tsubushi line above was not working, 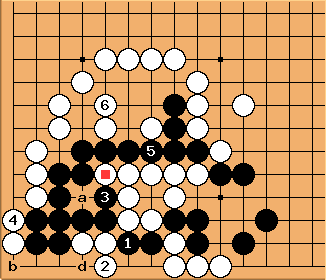 tderz: Black could try to play the important points in a different order.
The fun is, that the marked white stone plays the crucial role for making this problem a solvable one!
(my initial remark (now in /discussion, while put carefully in the conditional,
was thus plain wrong, yet touched the kyusho vital point).

If White goes for

(better shape, resp. possiblity for two points more than in above diagrams), then ... 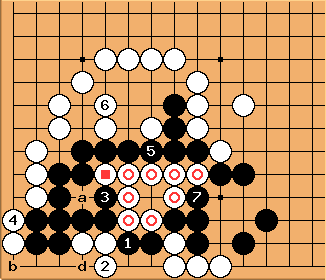 ... Black lives by squashing White (is this also damezumari?).

Malcolm There is more to this problem. Given the above, White plays 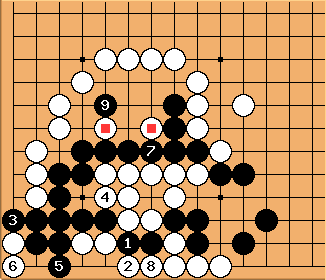 White can't stop Black from getting a second eye by capturing one of the marked stones. 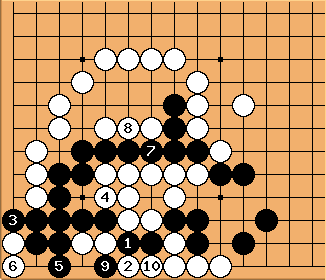 White can try resisting at

If I'm not mistaken, this misfires, as Black gets a sente seki.
Black can tenuki after

, leaving the rest in reserve as ko threats. 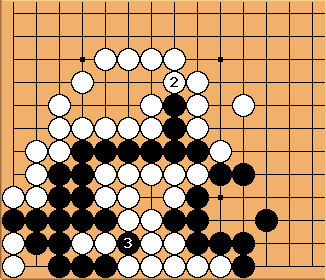 tderz Except for the sente seki, I have seen the other variations.
Once you see what doesn't work, W would go for the variant where she grabs the four stones in sente.
Thus, we haven't displayed the most probable variant yet.

John F. It's fascinating to see how much can be quarried from this problem, but it may be that you are trying too hard to justify the original position. The point is, this is not the position that appears in the original XXQJ. There it appears in two versions (there are many duplicates). One version looks much simpler, but the solution is essentially the same, but in both the four black stones at the top are joined and cannot be cut off. The problem you have here is the one in the Korean version of the book, which is deviant in many ways, though it also appears in the Hashimoto Japanese version (but, in Japan, not the Go Seigen one). The recent Yellow Mountain book is a translation of Hashimoto's book, so that is not reliable either. The problem as presented is clearly very interesting, but as it is at best a derivation or at worst a corruption of the original, it seems a little pointless to agonise over whether one should try to live or kill, or whether there is some hidden significance in even having the option. The original intent was not ambiguous anyway. Ironically, one name of this problem is Moths Darting into Flame. That could perhaps be used to describe the efforts here, though the other name, Two Wings of a Phoenix better describes the brilliance of some of the suggestions here. A person compared to a phoenix's wing, that is something brilliant, was a person of rare talent. Presumably being compared to two wings signifies unusual brilliance. However, the two black groups, in the original, are also no doubt the actual wings - drawing phoenix wings as a sort of L shape was a convention seen in other problems in this set. This name seems further proof to me that the original compilers did indeed intend the black stones at the top to be joined up, the other black stones also appear differently in the original. The Chinese versions also come into two flavours but there the difference is whether the problem is hard or super-hard depending on whether some initial moves are shown as played or not.

Malcolm Interesting. It would be nice to see the different variants on this problem. If someone were to put them on SL, perhaps they ought to go on a separate page, for instance Xuan xuan Qi jing Problem 78 Variants?.

tderz Many thanks indeed, JohnF for the extensive historical excurs.
Malcom, you are the 'someone' who is credited for placing this problem here, resp. who started the discussion on the variations,
In those books I own, I make many annotations, quite often the failure variations are even more interesting. 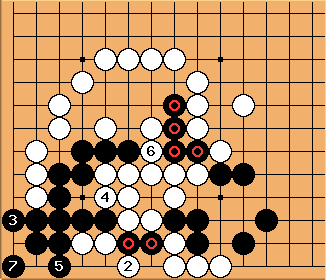 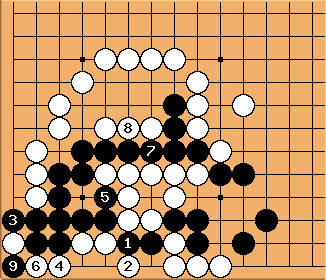 As far as I (Malcolm) can see, White may choose to make this risky ko.
So