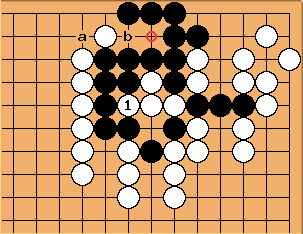 tapir: A try... Black has a sure eye at the circled point (because of the cut at a, a and b are miai), the white 1 selfatari secures at least one more black eye.

illluck: Sorry, but it looks to me like a and b are not miai. If white plays at b I can't really see how black could make the cut at a work. However, I think 1 is the solution as well. My idea is that black should play at b after white 1 to make a sure eye first. The four white stones are the other eye (snapback if white tries to escape).

tapir: White has made two bad moves in a row, in your examples (Selfatari and

) - i therefore changed your diagram, but later rechanged it because the discussion would be ununderstable else. 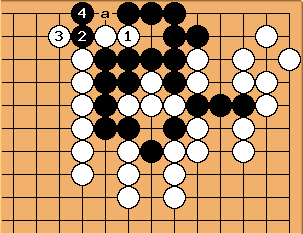 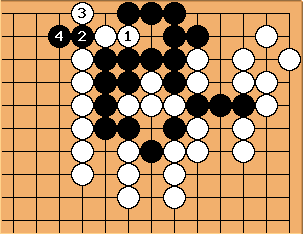 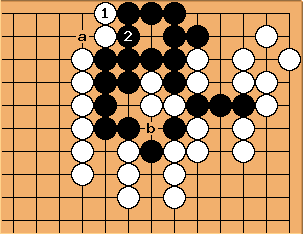 Does this work as well?

ChrisSchack: No, nothing forces B to play

and live ... W could still kill then with b or

tapir: Afaik the idea is one bad or worse white move and afterwards reasonable play from both sides. Since

may accomplish the same (Black life), but it is not the worst move imo. Even after the selfatari there is still a need for a black move. Even after capturing white in a snapback, white has the placement in the middle to kill black. So a black move is needed anyway. (White can't make Black alive here without Black cooperating, we may say :)) 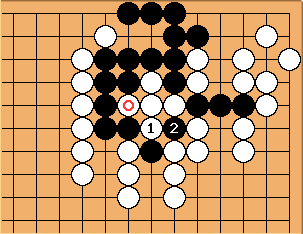 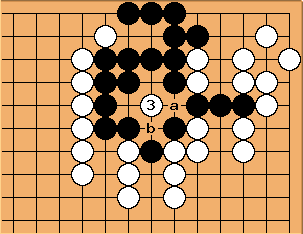 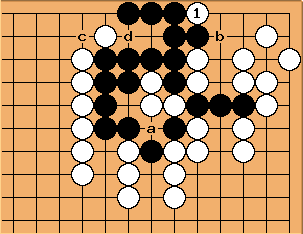 to create a third possible eye for Black? Now Black can tenuki. Regardless of where White starts, Black can live by playing two of the points marked a, b, c, and d.

is even worse, congratulations... i like to add another question. Such a dead group (without

) gives black a number of big ko-threats (around 50 points here?) - I have always trouble to evaluate kos during play, especially what can be done out of such threats: it may gain only 1 point in a late game half-point-ko or 49 points in some big ko... What can I expect to gain, what can I do to gain most? (Maybe to be moved to BQM)

unkx80: Wow, what a problem composition...