tderz It makes sense to explain the order of moves with a real example. Here is a sequence how this shape occurs frequently in games: 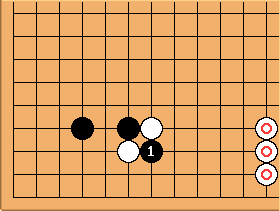 Black wants to make White overconcentrated on the right side, e.g. there might be a small white wall

(too) nearby.
(Only) In that case it does not matter if White is made even stronger by the black sacrifice - and - any chance of attacking White - is lost.
Of course White might try and resist otherwise. 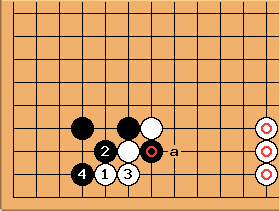 Of course, White must capture the black stone

. However, before doing that he still can play two useful kikashi - and - only in the right order. Kikashi is all about timing. This is an easy problem and kikashi/timing problems belong to the most difficult problems in Go. 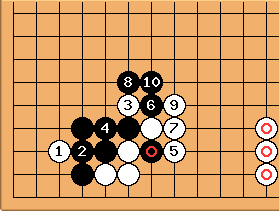 exchange would not work, because

) would not be atari anymore.
The

wall is now much too close to 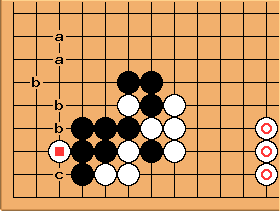 That this is not only an academic exercise is shown by the aji around a, after which White could threaten to put the

stone in motion (life) or - after Black defends around b, do something else useful with the stones around a.

Charles See also attach-crosscut corner patterns. I wouldn't call the crosscut a real 'joseki': it is an example of a contextual sequence.