The Flicky Game is a simple game that can be played with a Go set. The board position starts like this: 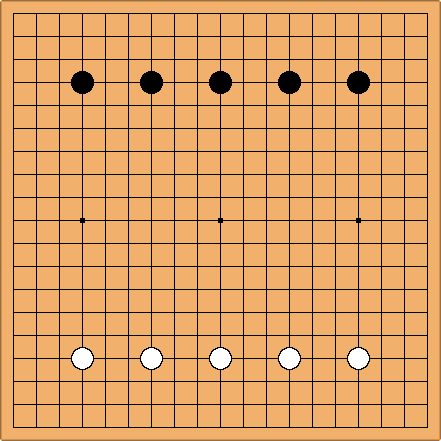 Players take turns flicking one of their stones with their thumb in an attempt to hit an opponent's stone and knock it off the board. If you successfully knock one off, you go again. If, on the other hand, both your stone and your opponent's fall off the board, yours is dead but your opponent's is returned to any one of the starting positions of their choosing, and your turn is over. When a player has no stones left on the board, they have lost.

video of herself flicking a stone.

It's also similar to the Russian game chapayev or chapaev. Chapaev was played by popular Russian youtuber

Yuri the Professional on a 13x13 Go board, in cooperation with Alexander Dinerchtein, who described it as a "new method to promote Go in Russia". In this game, the pieces are placed on the back row and are flicked with the index finger.