The reading width of a tactical analysis can be defined as the number of branches of the search tree that one explores while trying to reach conclusion about a certain position. The number of moves one "sees" at any step of the analysis is largely influenced by knowledge and intuition.

The other important factor in tactical analysis is reading depth. 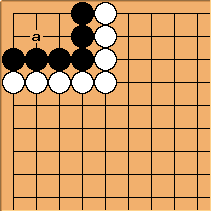 An experienced player doesn't need to explore this situation, because he knows White can kill at a.

Someone who doesn't know this position by heart, but has some basic knowledge about vital points, will normally investigate only a and b. 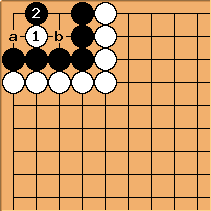 exchange, one will take another look at a and b, before reaching conclusion. 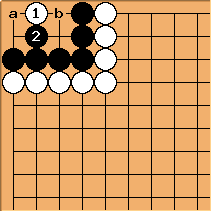 So, for a player with basic knowledge of vital points, the width of this position is 2 at each choice point. 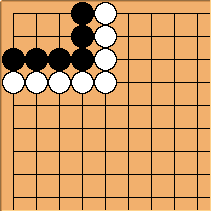 For a complete beginner, not having any knowledge of vital points or eyes, any of the six points is a viable starting point. This gives a width of 6 at move 1, 5 at move 2, and so on. Potentially there are 720 branches in the search tree up to depth 6. However, some will be illegal, and some will not be reached in a search because the black stones will already have been captured. Furthermore, if the beginner tries depth first search, as humans usually do, and remembers already visited positions, he will stop at a position that he has reached before, by permutation of moves. So in practice the beginner will not take all of the branches of the search tree. Still, this position is out of reach for a complete beginner, unless gifted with exceptional search abilities.

It is said that what distinguishes the professionals from the amateur, is that they are far more capable in keeping the width of their analysis under control, rather than being much better at reading very deeply.

Antti Tormanen's thesis on expertise reading width corresponds to what he calls the "number of chunks". The maximum size of these chunks would then correspond to the reading depth.