Hello to all. Thanks for visiting my page.. I hope you find something of interest here.

(9.22.07) I had taken a little time away from the game, but lately I have been playing a lot online. I went 3-3 at the Go Congress as a 1d and decided my play is too stiff. My moves weren't flowing well... and I was having trouble seeing the whole board. I'm now doing a much better job of getting a feel for the game. My reading is improving, and I'm starting to think my endgame is actually a strength. Next month I'll play in a tournament for the first time since congress, so I will see how that goes.

(4.5.06) I just got finished with two tournaments, and have predictably struggled with sustaining my rank of 2d. I am trying hard to improve, mainly by playing, but am reaching a point at which I feel specific studying my be necessary. My life and death is almost laughably bad, and doing a couple problems a day certainly couldn't hurt. My games now usually consist of me rushing into the middlegame to begin fighting as soon as possible. I'm not sure if this is a good way to improve, but hopefully my fighting skill will increase :)

(12.22.06) First update in a while. I had a good tournament at the NOVA Holiday Helper (4-0 as a 1k). My AGA rating is 2.03, so I met my goal of being a dan player by the end of the year. Now I am trying hard to study so I can defend my rank at the next tournament in February. My two year anniversary of playing go is in two days now :). My next goal is reaching 3 dan AGA by the go congress.

Professional Home Set (dead link) from Samarkand, and I think it's great. I've been using it a lot to go over basic fuseki ideas. My plan is to start working heavily on joseki (specifically 3-4 and 3-5) in the upcoming month. The interesting thing is the stronger I get, the less I feel that I know. I used to say with confidence what the strongest parts of my games were. Now, I don't believe that any aspects of my game are particularly strong.

One interesting thing I've noticed is how much easier counting becomes with experience. It used to be I had no idea the score of a game, or even whether or not I was ahead unless the margin was greater or less than thirty points. Recently, I've been able to tell if komi will play a factor late in games without specifically counting. I think that just by playing game after game, the mind begins to pick up on shapes and territories, and is able to quickly process their sizes accordingly.

(8.30.06) The 22nd US Go Congress, in North Carolina, was an incredible experience. I advise any player who is serious about the game to attend this annual event. The professional players there are very helpful, and getting the chance to play them was a great opportunity. The tournament itself was a good challenge. I promoted to 3 kyu for the tournament and I went 4-2. I also went 3-1 in the Die Hard tournament on the day off as a 2 kyu. My goal is to reach shodan by the end of the year.

My friend Matt first showed me go on December 24th, 2004. He showed me the basics and then crushed me in a 9x9 game. When I got home I downloaded Igowin and experimented with it. I started off by just taking the big points (literally- nine of the intersections on the grid are larger than all the rest). I quickly learned how to beat Igowin down to an even game, but had no hopes of beating it there. I played off and on for a couple months on yahoo and Igowin, and after finishing college in May I began to study go pretty seriously. I read about go online, and I had a couple of basic books on it. I started a KGS account in July 2005, and opened at 18 kyu.

In my opinion, go is the perfect game. It is a game of logic and calculation, but it is a game with many other demands as well. For me, the game is a challenge which never ends, and seeing the rapid improvement of others I know only pushes me to work harder at my own game.

I play very different games in club, tournaments, and online. I think I play my strongest games in club, although Im not really sure why. In tournaments I think my moves are stiff and tend to not flow well. I tend to build up leads in the opening, and then make some bad mistakes in the middle game which lead to complicated fighting. At the Congress, I improved on this to some degree, but I still find myself being completely lost in the late middlegame / early stages of yose.

The only part of my game that I would consider "strong" (at least for my level), is my handicap game as black. The weakest parts of my game are far easier to identify: My joseki knowledge is horrible, I let my groups become too weak, and my endgame is poor. I'm trying hard to work on these aspects of my game, beginning with joseki.

My new favorite fuseki as black: 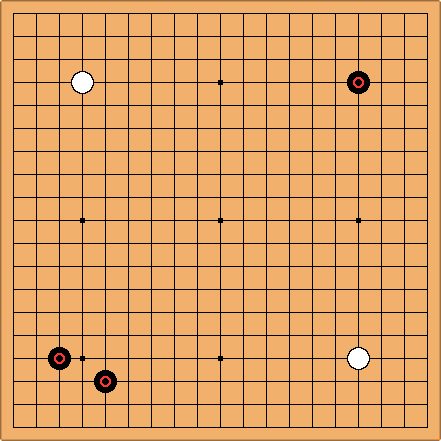