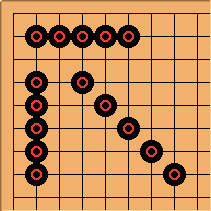 The object of Pente is to either connect 5 stones in a row or capture 5 pairs of 2 stones. 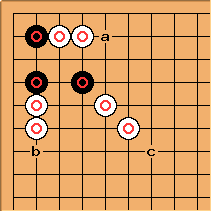 A black play at a, b, or c will capture the two white stones. But you can only capture exactly two stones, so white can extend to three in a row to avoid capture. There is no self-capture, you can put two stones between two enemy stones and they are not taken off.

OBJECT OF THE GAME:

Place the board in the middle of the playing area. Start play with the board completely clear of stones. The first player (chosen by chance) begins the game by playing one stone on the center point. Thereafter the players take turns playing their stones, one at a time, on any empty intersection. The stones are played on the intersections of the lines (including the edge of the board), rather than in the squares. A move is completed when the stone is released. Once played, a stone cannot be moved again, except when removed by a capture. The players take turns adding new stones to the board, building up their positions, until one player wins.

Whenever your opponent has two stones (and only two) which are adjacent, those stones are vulnerable to capture. The pair can be captured by bracketing its two ends with your own stones.

This is to be considered the best advanced variation of Pente. Originally proposed in 1983 as a new tournament rule by World Pente Champion Rollie Tesh, it is perhaps the "preferred" way to play by experienced Pente players.

KERYO PENTE RULES: All the normal Pente rules remain the same, with these two exceptions:

Tria Capture: In addition to capturing a "pair" of stones, it is also possible to capture a three-in-a-row (called a "tria") by bracketing its two ends.

To win the game on captures, one must take a total of 15 (or more) stones from the opponent, rather than just 10 as in normal Pente. This total of 15 can be from a mixture of normal captures and tria captures.

EFFECTS ON PLAY: You will find that the new type of capture results in more ways to counter-attack when you are on the defensive. When you block a tria, you simultaneously threaten to capture it! The opponent must extend it into a safe four right away. Thus, the attacker has less tactical "flexibility" and must be more careful than in normal Pente. Interesting "see-saw battles" occur more frequently. The extra number of capturing possibilities allows new creative approaches to play.

ANSWERS TO COMMON QUESTIONS ABOUT PENTE

Does six-in-a-row also win? Yes, six or more stones in a row wins the game as well.

Can a stone be played on the edge of the board? Yes, you may play on the very edge of the grid; and also inside the four hemispheres, each of which covers three "invisible" intersections that can be used.

Can I break up five-in-a-row by capturing one of its stones? No, when a player gets five-in-a-row, he or she wins immediately. It does not matter if the opponent can "capture across" the winning five-in-a-row, even if that would be his or her fifth capture.

What happens if I form a pair between two enemy stones: Are they captured? No, you cannot "capture yourself" by moving into a captured position. Instead, the pair remains on the board.

After making a capturing move, do I have to option of leaving the captured stones on the board? No. Captured stones must be removed. However, if all players overlook that a move is a capture only to realize it later in the game, the "capture" stones remain on the board.

What happens if the position gets disrupted? Move carefully, as he or she always loses who drops the pieces and messes up the board!

Who moves first? The first player has a slight advantage. Therefore some method of chance should be used to decide who plays first in the first game. In following games, the loser of the last game moves first. The advantage of the first move can be eliminated by using the tournament rule-See Tournament Rule in ADVANCED VARIATIONS.

Can Pente be played by more than two people? Yes! See BASIC RULES FOR THREE OR MORE PLAYERS.