Orbit is a Go variant designed by Steven Meyers and played on a Go board, with the standard size being 16x16. you can read more about this game and others at

Black and White play alternately, with Black going first. In his/her move, the player can place a stone of his/her colour on a legal intersection, or simply pass. When both players pass, the game ends. 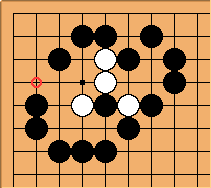 An orbit is a one colour encircled domain on the board. In Go terms, the domain is said to be encircled if it has no liberties. Once a player forms an orbit, all the oponents stones inside the domain (if there are any) are removed from the board, and his opponent isnt allowed to play within it.

A half-orbit is a domain encircled by one colour using one edge of the board. Once a player forms a half orbit, his opponent isnt allowed to play within it, however his already existing stones inside the domain are not removed.

Note that a half orbit contains one and only one edge of the board. Moreover, a corner point is always considered to belong to both its edges, and therefore the black stones in the diagram don't form a half orbit.

Moreover, while placing a stone on such an intersection so that it has no liberties is allowed in Go, in case that this stone can capture opponent's stones - in Orbit it is unallowed to place a stone inside your opponent's (half) orbit, under any cirumstances.

When the game ends, all dead stones, i.e. stones that arent orthogonally connected to an edge and are placed inside the opponent half orbit (and therefore removable, since the opponent can encircled them with a complete orbit) are removed. The winner is the one to have more territory - unoccupied intersections in which the player can place a stone but his opponent isnt allowed to. Note that the players dont get points for the opponent's removed stones.

It should be marked that half orbits can be overlapping - actually that's what makes Orbit an interesting game! In the diagram, neither player can play at the marked intersections.

Unfortunately, there is only one server supporting Orbit on the internet:

Richard's Play By eMail. Fortunately, in order to play in real time, you can use KGS demonstration game sophistically: if you want to play on a 15x15 board for say, then open a 17x17 demonstration board and play only on the inner 15x15 board there. Use the "set players" option, and when you need to remove captured stones that are not captured too by the Go rules - use the edit tool.

Unsurprisingly, playing first is a great advantage in Orbit, and therefore adding a special rule in order to balance this advantage is conventional.

A very elegant way to do so is using the pie rule, which the inventor of the game included on the original rules. However, judging whether to swap colours or not could be complicated, especially for unexperienced players. Moreover, since Orbit's opening moves are more diverse compared to Go's, the difficulty of judgment is crucial and might result in a disadvantage to the weaker player before the game even started.

Another option taken from Go is giving a komi to the second player, although, since Orbit has not been researched enough, it is unclear what the komi ought to be.

2. Ko can never occur in Orbit

Unlike Go, the same position on the board can never occur more than once, no matter whether it is a standard ko consist of only one captured stone that is immediately reoccupied on the consecutive move, or a complex cycle.

Mathematical proof: in order for a position P0 to repeat itself, at least one stone of P0 must be captured and latter on reoccupied after several moves, let's say the white stone S0. In order for S0 to be captured, Black must later on encircle this stone by an Orbit, and thus must place at least one new black stone that wasn't participated at position P0. Let's call this stone S1, and let P1 be the position accomplished by the form of the black orbit that captures P0.

Position P0 cannot be repeated until S1 is removed, however in order to remove S1, White must capture the whole black orbit which S1 is part of, since White is prevented from playing within it. Thus there must later be a white orbit encircling the black orbit, contains at least one white stone that wasn't participated at positions P0,P1. Let's call this stone S2, and let P2 be the position accomplished by the form of the white orbit... this process can never end, therefore it follows that position P0 will never repeat itself.

3. Playing by paper and pencil

It is always, in any circumstances, a bad idea to play inside your own (half) orbit: this can only reduce your territory by one point, or to do nothing in case that your (half) orbit has been captured. This kind of move cannot protect any further any of your stones, since your opponent isn't allowed to play on that intersection anyway.

A useful product of this argument is that Orbit is playable with paper and pencil: when a stone has been captured, you can simply mark it by X, knowing that neither of the players is about to play on that intersection until the end of the game.

Much like Go, using a selective mirror play strategy - meaning, reflecting your opponent's moves through the center of the board - can be useful in Orbit. of course, playing blindly by this rule is stupid, since your rival can easily force you into a trap - however, doing so selectively is very useful, especially against stronger players or when playing White with a big enough Komi. That way, whenever you think you have a better move than you opponent - and especially when he/she is trying to make a trap for you and is obviously not playing the best possible move - you can simply make your own move, and gaining an advantage over your opponent by doing so.

The following two sections intended for the more mathematical-oriented reader.

5. Orbit is a combinatorial game

Like Go, Orbit is actually a combinatorial game, basically meaning a game in which the loser is always the one who got into a position where he/she has no legal move to commit, and the winner is the player who makes the last move: if we slightly change the rules so that passing is unallowed, it follows from property (2) that eventually one player is about to run out of legal moves, and hence lose the game. But who is it going to be?

When the game reaches the stage where the players have no useful moves to commit and hence they wish to pass, since we don't allow them to do so they will be forced to play within their (half) orbits, which are the only legal moves they have left. Then, the player to have lese territory will run out of moves first, and hence lose. Therefore the result is the same as in regular Orbit (or to be more precise, the resule is the same up to one point - since there might be an odd number of dame points).

6. Philosophy of the game

to be completed soon.

to be completed soon?

The page was written by Leareki