Go can be played on different sized boards than 19 x 19 with a corresponding different number of stones. 9x9 boards are often used for fast games or by learners. 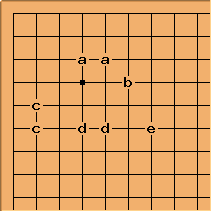 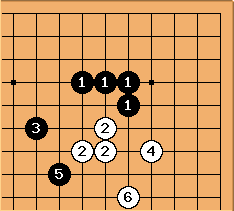 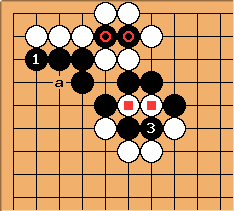 In diagram 3 the stone marked with

has 5 liberties. They are made up of the two unoccupied intersections adjacent to it plus those adjacent to the other stones connected to it. Note that the liberty marked with 'a' is only counted once even though it is adjacent to two stones of the 'group'. The stones marked

have no liberties and should be removed from the board. If the black stone marked

was the last stone played then the white stones marked

should be removed as they have no liberties; the black stones can then stay on as they have the liberties vacated by the captured stones. 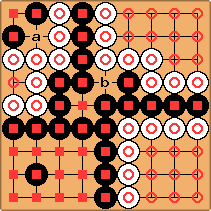 In diagram 4 the thirtysix points marked

are territory for black and the fourtythree points marked

are territory for white. The points marked 'a' and 'b' are territory for both players and can be ignored. (Note that either player could play on the point 'b' to deny their opponent one point of territory but that neither could play at 'a' without letting their opponent capture some of their stones). This was an even game so we add seven points to white and see that white has fourteen points more than black; thus white is the winner. 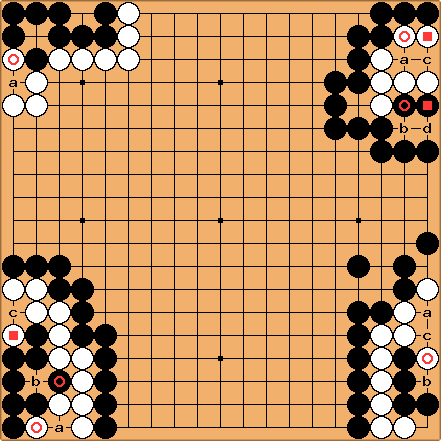 In diagram 5 we see some examples of repeating situations.

In the top left if black plays a, capturing the white stone

, white wants to respond by playing at the empty point just created at

, capturing black a. This is not allowed (see definition of move) as it would repeat the situation after white's last move. This position is known as ko.

In the bottom left if black a, white b, black c, white a, black b, then white is unable to capture at c as that would repeat the starting position.

In the bottom right if black a, white b, black c we get a situation where white would like to recapture at

but this would repeat the starting position, and so is not allowed.

In the top right black a, white b, black c, white d, black

creates the position where white cannot recapture at

(without repeating the board position).

In all the above cases white must play somewhere else to change the board position (preferably inviting a black response) and if black does not play there again (usually to connect the ko) white may recapture in a future move. 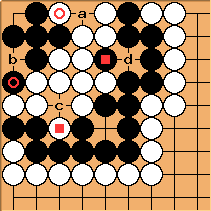 makes a situation where white cannot recapture at

. Black cannot recapture at c or at

(as that would repeat a previous board position); so moving first in this position gains nothing (and could lose everything).

In diagram 7 black a, white b, black

repeats a previous board position but with the other player to move so black is allowed to play at 'a' in this position.

Before counting at the end of the game it is necessary to remove any of the opponent's stones which can be captured. The rules allow for these 'dead' stones to be removed by mututal agreement. If the opponent does not agree to their stones being taken off the board in this way then it is necessary to play the moves to capture the stones. Where there is disagreement about who should have the first move in such a situation it is usual to allow the person whose stones are in dispute to have the first move to defend them. (They may of course choose to pass).

If a player attempts to repeat a previous board position it is up to their opponent to spot this before playing the next move (they cannot complain later). The invalid move should then be removed and that player's move be treated as a pass.

In other cases of moves that do not conform to the rules (eg. a player making two moves in a row or moving an already played stone) the game should be restored to the point where the illegal activity occurred with the offending player's last move being treated as a pass. If it is not possible to restore the board the offender should forfeit the game. In all cases the tournament referee (if there is one) should be called to oversee this process before any stones are moved. 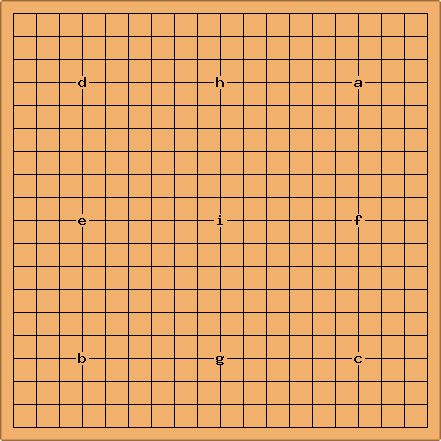 The size of the handicap is up to the players concerned or the tournament director but where both players have NZGS ratings the best handicap is the difference of their ratings rounded up to a whole number. If the difference is less that 0.5 they may also choose to play an even game.

The rules should be used in a spirit of fairness and cooperation. Where disputes arise they should first of all be settled by the players themselves. A higher authority (in the form of tournament referee or higher rated player) should be consulted in case of disagreement. In all cases, once the game is finished and the result confirmed by both players nothing can change the result.