Of all the possible ways of placing some black and some white stones on a go board, only some can arise in a game in which the players follow the rules, starting from an empty board.

To be a consequence of legal play, a position must be such that each stone or chain of stones on the board, of either colour, has at least one liberty. 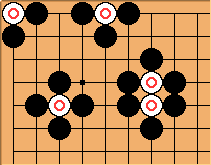 This diagram shows part of an illegal position. None of White's stones

has a liberty. All of them are captured, and should already have been removed from the board.

This position is also illegal. Neither of the marked chains has a liberty. One of them has been captured, but which one? This position can exist only during a play. Before the end of the turn the player with the move should remove the captured stones. It is also true that any legal position of this kind could arise as a result of a game played within the rules. The number of legal positions is large, though not easy to count, and of the same order as the number of possible ways of placing stones without restriction.