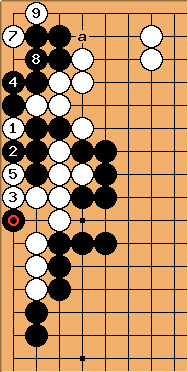 fractic: I don't think White has any hope. Black dies in the corner. Too bad that White's group is also dead and has less liberties. It takes Black only 3 moves to capture the entire group. Throwing in at

also doesn't work, neither does playing

earlier or playing directly at

at a is met by

togo: If nothing else, this would make White at a sente. Not much damage, but not zero either. When considering a bit more, after White at a, every White move in the corner will be sente and no black endgame intrusion possible. 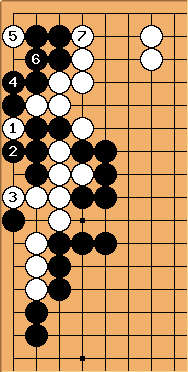