Kingo is a Go variant. It differs from Go in the following aspects:

In a similar variant called Jingo, captures are required to be made with kings, which enables doing away with the ko and superko rules. This results in an intriguing but quite different game, as false eyes become true unless they arise from captures. All other Jingo rules are the same as in Kingo. 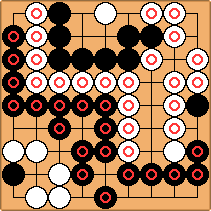