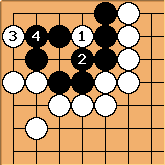 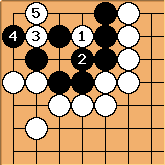 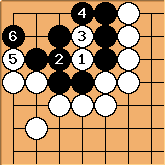 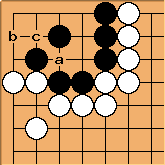 xela: My poorly trained intuition tells me that the interesting points here, in order, are a, b and c--but when I try to read it out, none of them seem to work: 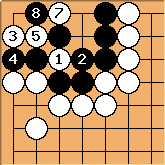 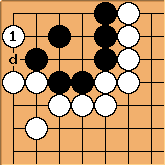 Black d works out the same as variation a above.

edit: Not so! See Skylancer's variations below... 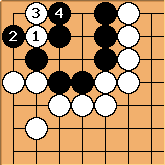 Here there is room for black to make a mistake:

kills. But in the diagram black is alive. 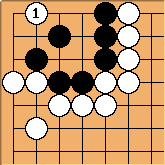 Skylancer (3k): I see some interesting continuations starting with 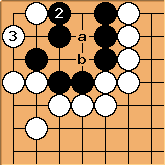 , White can pull some profit with

. I believe that Black at A or B leads now to some very beautiful killing sequences. 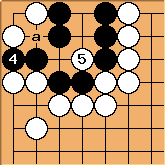 or A, White still manages to either turn black's corner into a seki or to capture a few stones with 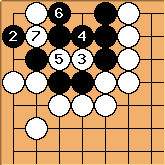 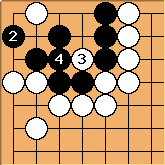 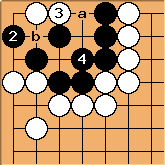 seems to fail too. A and B are miai. 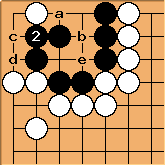 Skylancer (3k): But, unless I am missing something, I cannot see how White can refute

here. A is met by B, C and D are miai, and regardless of whether White throws in a stone at E now or later, Black is guaranteed to get an eye there, while White cannot get any such eye in the corner.

Maybe these musings will point the way to the solution, if there is one. 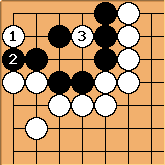 Skylancer: Update: Aha! I think I have it, or at least something close. Xela had a good first move. White will gain something here. If Black does not block with

, then White can at the very least play

to gain more than a simple endgame push. If Black does block with 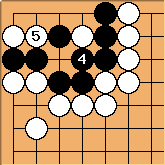 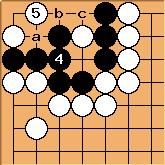 Seems like seki. Or, if Black now plays A, White can get a ko with B, or profit with a capture at C. 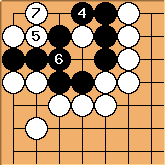 White gets at least a seki with this 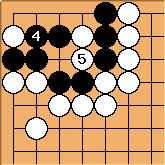 If Black does anything else, White gets a double atari at 5 and either kills Black, or captures some stones. (Apparently kills Black for this specific

, in a very cool sequence).

So Black has to lose something now. Or does black have a defense against this? Did I make a mistake?

Can black be killed in all cases rather than get a seki or ko? 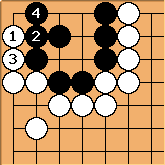 xela: In summary, this represents best play for both sides? White has reduced black's corner to five points, in sente.