Played with Go stones on a goban. The purpose of this game is to get five stones in a row.

Within the first three lines of the board, in the 8 squares made by the first 9 lines, are placed 8 stones of one color, as in a chess or checker board. As with chess there are four rows of squares between the players.

To play, Black first slides a stone into the four middle rows, and then play alternates.

If a player gets stones on two opposing sides of a stone of opposing color, the stone is captured and removed.

There are a number of web references, e.g.

Copied from the web page: 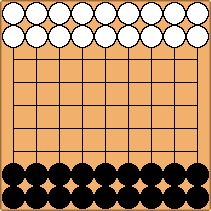 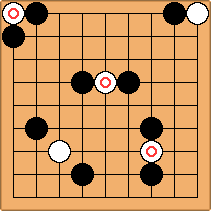 An opponent's piece may be captured and removed from play if it is flanked orthogonally between two of the player's pieces, or trapped in a corner of the board.

(hk: This is called custodial capture, and is used in many ancient games from all over the world such as the Norse game Hnefatafl, the Roman game Ludus latrunculorum and the north African game Seega. Interesting that it can be found as far away as Japan!)

All the marked white pieces can be captured.

Robert Pauli: There seems to be no consensus on what exactly hasami shogi is:

hirohiigo: Hasami shogi is originally meant to be played, as the name implies, on a shogiban with shogi pieces. In the shogiban variant (may not apply to the goban variant), sente uses 9 unpromoted pawns and gote uses 9 promoted pawns to play, so there are 18 pieces in total. The pawns move like rooks and capture by surrounding them orthogonally (to the side if in the center of the board or smothering on a corner). Pawns cannot jump over each other, and they can capture more than one at a time. You can see a complete overview of the game in this video,