Path: <= All you ever wanted to know about sekis =>
Sub-page of Hanezeki

unkx80: The following was the old contents on why hanezeki is a seki. Unfortunately, I found the presentation confusing, and so I decided to rewrite it.

Seki with strings in atari; Explanation why White cannot capture the stones 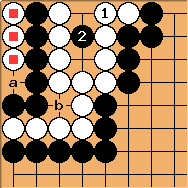 captures three stones, but also costs a liberty.
In semeais you prefer to start from the outside, resp. taking away the liberties from the other group.
However the left

inside the black group form a local seki, hence White is unable to start there.
Thus White puts herself at a disadvantage to start anywhere else than the preferred place (outside/other liberties). This disadvantage continues after

, as White cannot approach from the outside by a, as it would be suicide and create a life-enabling shape for Black.
White is forced to fill another (own) inside liberty -> b. 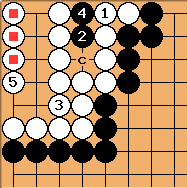 , White is down to atari c,
but so is Black and thus has to remove the 3 white 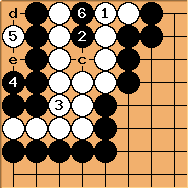 in order to be able to kill,
however Black is able to play atari

and be 1 liberty ahead .

Herman Hiddema: More important is what happens if white does not play

in the above diagram! 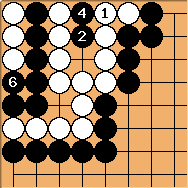 Herman Hiddema: Black continues by filling a liberty at 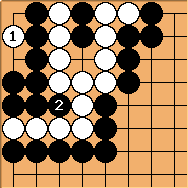 Herman Hiddema: White has no option but to play

, to keep the black group dead. This doesn't help however, as black now plays

, putting the white group in atari.

The above diagrams are the true reason that neither player should capture in the original diagram. At the start, both players have a big eye. By capturing you remove your own big eye. See also BigEyeSmallEye 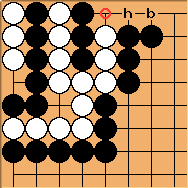 tderz: The position started as here and White had to find a way to survive (play h).

blubb: Why doesn't White play at the marked point? [1]

[1] Blubb is right, my starting diagram is worthless, it must be different.: 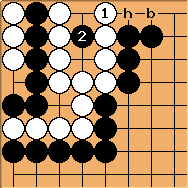 tderz: Replying to blubb's question Why not to capture at 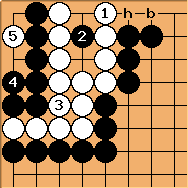 becomes necessary, as is