MK: I wonder what is your opinion: does the order in which handicap stones are placed matter much? Do pros usually care about it when someone plays with them?

DrStraw: None of the other replies seem to address your question, which I interpret to mean does it matter which order the stones are placed, not where they are placed. For example, when placing a two stone handicap should you place the one closest first or the one farthest. As far as I know there is no such etiquette. At least, I have not heard of one in the more than 40 years I have been playing.

Slarty: Occasionally it could be nice not to put the first handi stone on the expected/polite corner for an even game, if there's some doubt as to whether it will be a handicap game or not. That's all I can think of.

WillerZ: See Handicap Placement for the traditional placings. Not sure if anyone is too dogmatic about it, however.

MK: Yeah, some strong players are dogmatic about it considering it to be clumsiness on part of a weaker player. I wonder if pros are usually like that too?

WillerZ: It depends on the ruleset in use -- I believe some rulesets require standard stone placement, and others are more flexible. Personally, I feel that it is up to the player receiving the stones to decide where to put them -- the standard positions are believed to be pretty close to ideal, so Black may be at a disadvantage if he doesn't go with the normal way, but I think it would be rude of White to object to that.

Hu: In Chinese rules, as implemented on KGS, there is free placement of handicap stones. 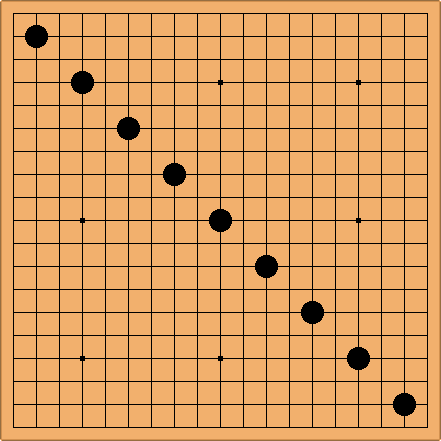