SiouxDenim Forgive me if this is stupid... If there is a Molasses Ko, only small ko threats and superko rules, then normal Go appears to become No Pass Go. If that happens then the value of each move is one of the gamut of CGT infinitesimals. Is this a suitable example???

RafaelCaetano It is not a stupid question to me. But why exactly it would turn the game into No Pass Go? Surely it will not always do so: if (say) Black is way ahead in the rest of the board then it can afford to pass and get captured.

OK, let's assume that neither player can afford to lose the molasses ko. I can imagine that they will play NoPassGo-looking moves, but they certainly won't put the circle-marked groups in atari. 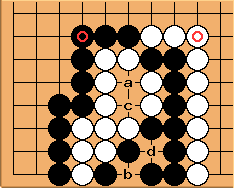 Will it turn the "rest" of the board into No Pass Go, assuming it contains only "small" groups?

SiouxDenim Too right RafaelCaetano, I should have had a small ko threat assumption. Pondering this question further though, I realise that once groups get close to dying in NoPassGo, they'll provide large ko threats from the point of view of the MolassesKo. Thus NoPassGo will eventually stop and a ko fight start. My guess is that the board positions are still infinitesimal, but not necesarily in quite the way I imagined.