Eleven spaces is Not enough

Using scripts similar to those that generate chess endgame tablebases, I have verified the claims next to the following two diagrams. 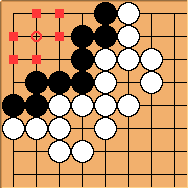 The corner is not yet Black area.

Black can play at any of the 7 marked intersections to make himself alive outright with 10 points of territory, but

is best because it leaves either no ko threats or only one tiny one (depending on the rules).

. (Any other White move in the corner lets Black respond to become alive outright with 11 points under territory scoring.) After

, she can confront Black with the choice between: 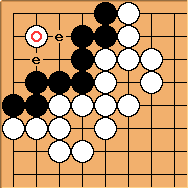 If White does want to give Black that choice and the next move in the corner is him playing either e, then she must respond at the other e. If Black is komaster, then he can still move to make this his area. Moreover,

does not even threaten a ko to kill Black if the rules in use imply that a long cycle is a win for him and that his corner group in self-contained Moonshine Life is not killable.

(The following is based on the results of my scripts, but certainly not verified by them.) 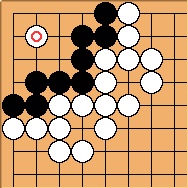 I get the impression that

lowers the corner's temperature, since 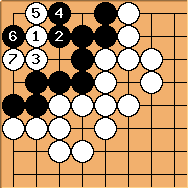 Black can force a seki with sente.