This page is about mistakes I have made in my games.

At first i was very pleased with this game. Not many mistakes occurred in the first half of the game. 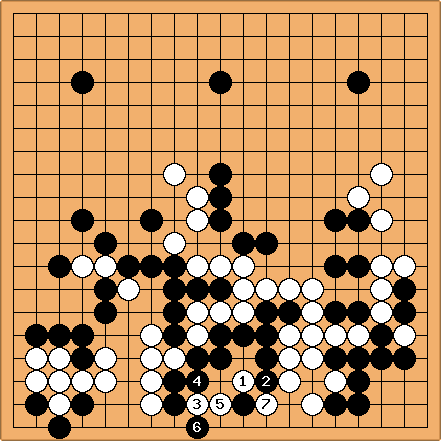 After a good long fight, white was in a pinch for making his big group live. He decided to attack my lower group, if it dies, he would gain a very great advantage, if it lives, white would have a lot of trouble turning the game around.

In the next diagram is an illustration of how black could have had a chance to survive the fight. 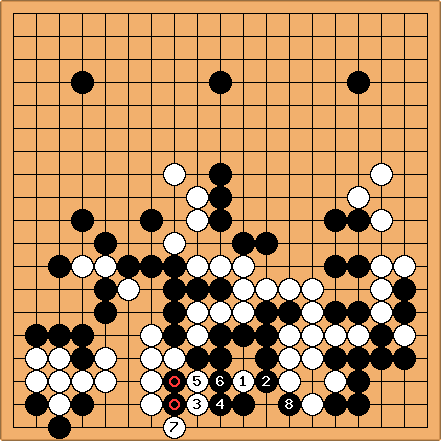 After 'Black 8' a ko is formed. whoever wins this ko, will most likely win the game. 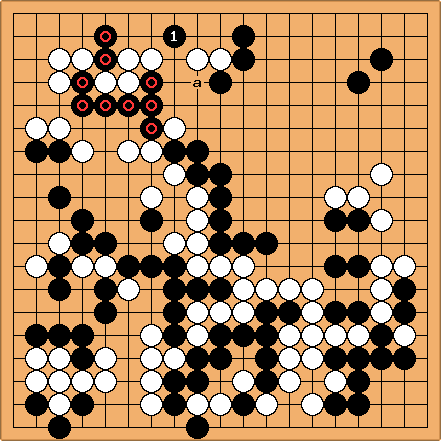 The second mistake was when I played 'black 1' instead of 'a'. I didn't want to give white a lot of territory, but instead, my marked group died afterwards, giving white a very very big corner.

After losing 2 relatively large clusters, the game was not yet over. But when I made a final reading mistake in the endgame, white was leading by over 50 points... I resigned. 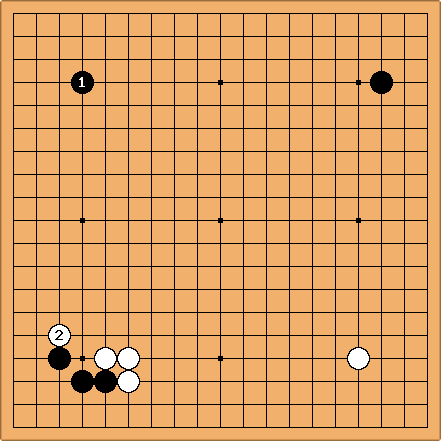 After leaving the joseki incomplete, I decided that the upper left corner was bigger than 'white 2'. 'white 2' was huge... 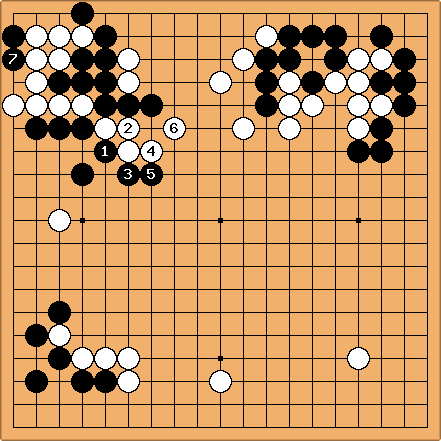 After playing 'black 1' to 'black 7' I removed my own liberties and sealed my own group in, making it dangerous. The bent 4 has now become a normal ko.

I won the ko due to a stupid mistake, and right after that, he resigned.

This is the worst game I have played in ages. A short descrtiption of many things that went wrong:

There where a few BIG mistakes that gave him the advantage most of the time. However I managed to crawl back to an even game and even take the lead from time to time, he always found some big flaw, taking a 20 point lead every time. I had crawled back to take the lead about 3 times. 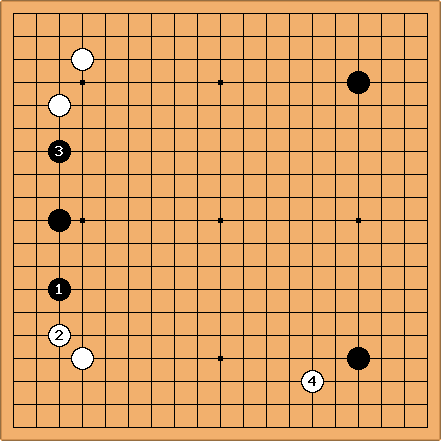 This sequence caught me by surprise, I didn't expect black to take the entire left side in 1 move. Being a little shocked, I tried to calm down and still play a pretty decent game. 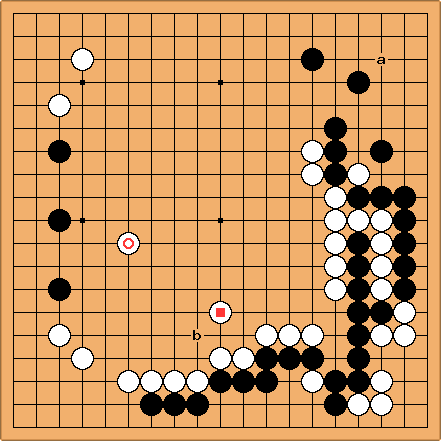 After a while I managed to take his lower right corner AND get a lot of influence towards the center. By playing the move marked with a circle, I thought I could take the center, however I miscalculated the value of this move, because black has many ways to reduce the centre.

The stone marked with a square was to protect the cuts.. however, playing at 'b' would have been a better shape. 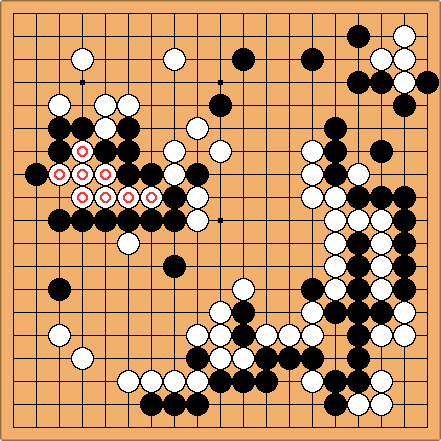 After a desperate attempt at saving the centre, I lost a cluster of stones. I almost resigned before I counted the current scores. There was a 23 point difference, wich was worth playing for. Even if the centre isn't even half of what it appeared to be, all was not lost. 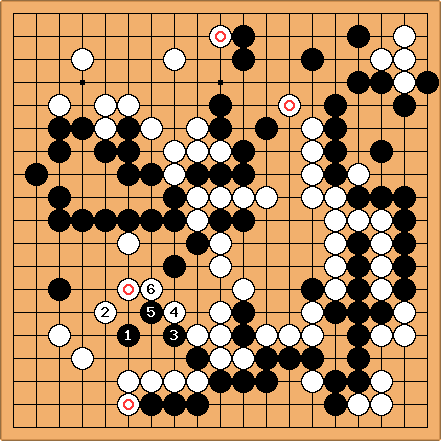 I managed to get my "cool" back and played a few big moves marked with a circle. After 'black 1' I managed to capture his stones while saving my own stone that seemed doomed. At this point I am leading the game with about 20 points. 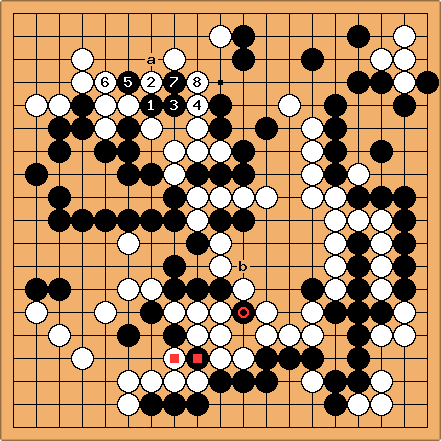 Even after taking back the lead, I desperatly hung onto my stones, while sacrifising that small cluster and playing at 'a' taking the upper side, i tried to save them, resulting in black taking half of the upper side with a ko.

Ofcourse he won the ko, taking half of the upper side, however giving away his upper right corner.

The ko managed to put the marked black stone as a threat making me capture the other marked black stone. After a while, I managed to maintain a 12 point lead, untill black played at 'b'. After that, black got into the secure territory I already had, and won by 11,5 moku.

I hate this game :p

There where 2 big mistakes in this game, the first one happened on the bottom right corner. 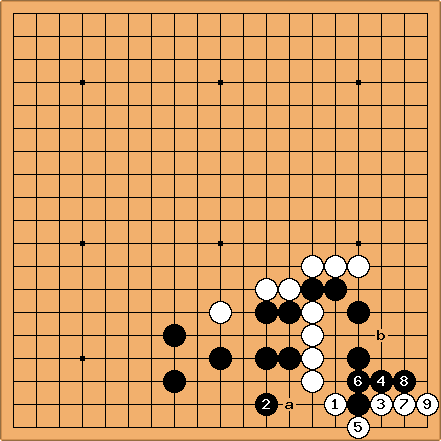 Instead of playing the move at 'white 3' I played the move at 'black 2'. The following sequence resulted and after 'white 9' I played 'a' and white played 'b'. resulting in the death of black in the corner. This gave white the points he needed. White got a big corner and influence towards the top right, This was a big setback for me. 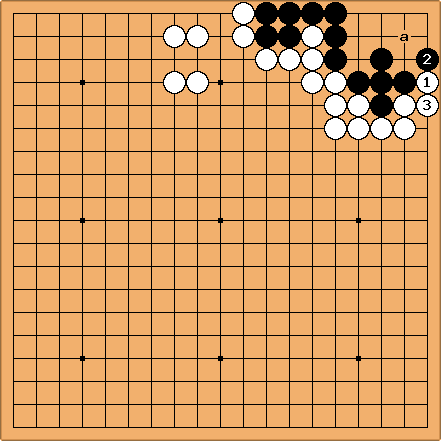 This was the biggest mistake I have made so far. After I ignored 'white 3' white played the move at 'a' killing the entire corner. With the corner being murdered, I resigned. If this didn't happened. After losing the bottom right group as seen in the foregoing diagram. It would have been W+13,5. Wich is not bad since it was a game against a 7d ^^. 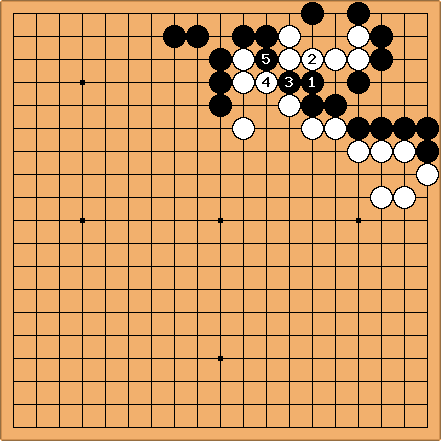 This is only the upper right part of the entire game, this is actually the last few moves of yose. If this mistake wasn't made, I would have won the game by 14,5 moku.

Instead I played 2 where I should have played the move of black 3 instead. this way, I wouldn't have gotten cut off and won the game. Instead I lost by 2,5 moku because of this cut. 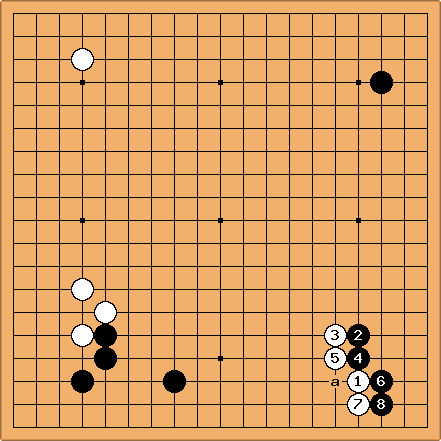 Instead of following joseki, playing the move at 'a', I played 7, leaving a nasty cutting point at 'a'. I wanted to make influence to the bottom left side, because another extention from black would be too big. I gave away the corner in order to be able to reduce the bottom side and later the top right side. 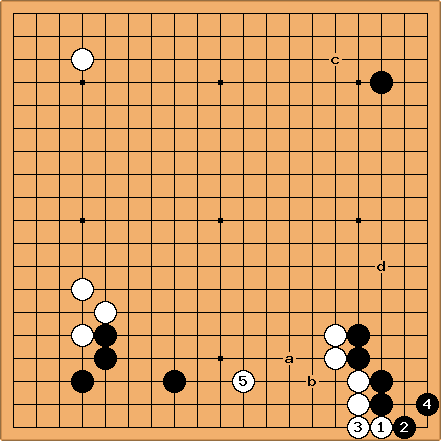 Even after 5 the cut was still dangerous, so I was very pleased to see that syuqei played the move at 'a' so i could defend the cut at 'b' while securing the territory i have made.

The only problem left is the influence towards the top right side, wich is reduced later. I consider myself lucky that my opponent didn't play an extention directly, but instead attacked the top left corner. After he attacked the top left, he enclosed his top right corner with a keima at 'c'. That gave me the ideal oppertunity to reduce his right side influence with a move at 'd'

The rest of the game went peacefully, with some attempts from black to greatly reduce my territory, leaving only a trail of dead black stones.

I won the game by resignation.