I'm convinced this problem, as I understand it, is impossible.

Consider: Black plays A2 the first time. There is now a stone at A2, so in order to satisfy the second condition, white must capture it. Now, black plays at A2 again. Note that this is not possible if A2 was the only stone white captured, as that would be a violation of the ko rule.

Thus, black has played A2, which was also bordered by some other black stones, which white captured, followed by black playing at A2 again.

Now white must capture once again, so we need white to have at least two stones bordering A2. White captures a single stone and.... there's no way for black to play A2, as he would be committing suicide or violating the ko rule.

fractic: I just found this problem thanks to your failed attempt. It is definitely possible. Your reasoning goes wrong at the end. Black can capture those 2 or more white stones in one go.

Here's my solution of the problem: 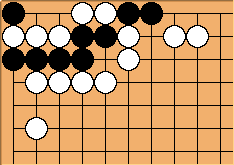