Bridge Go is a variant which tswett came up with. The idea behind Bridge Go is to make life more difficult by changing the capturing rule (in summary, "eyes don't count"), and to change the win condition to something immediately recognizable (connecting two opposite sides of the board).

Bridge Go was originally motivated by my feeling that Go's scoring system is somewhat artificial and inelegant. My original idea was to make the victory condition be capturing all of the opponent's stones, thereby completely dominating the board. Of course, this required somehow changing the capture rule so that "liberties on the inside don't count".

The big difficulty here was coming up with an exact definition for what it means for a liberty to be "on the inside". My original idea was to say that a liberty is "on the outside" if and only if it can reach three different corners. This raised the question of what should happen if a player builds a wall across the board, separating one pair of corners from the other pair of corners. Should all of the player's stones (or even every stone on the board) be captured? I decided that a good way to handle this question was to simply make building such a wall be the victory condition.

When I came back to Bridge Go a while later, I realized that I couldn't think of a version of the "three corners" rule which was actually viable, so I changed it to the "two opposite sides" rule that Bridge Go currently has. I decided to keep the "build a bridge across the board" win condition, since it still meets my original goal (making the win condition immediately recognizable). Besides, it's not clear whether or not it's feasible in the current version of Bridge Go to capture all of the opponent's stones without invoking "total self-capture" (see the relevant example under "Capturing", below).

I don't know whether or not it's possible to create life in Bridge Go. I've played a couple of games, and I haven't seen any obvious way to do it.

A liberty of a stone is "external" if and only if there exist two paths connecting the liberty to opposite sides of the board, where each path moves only orthogonally, and cannot step on a stone of the same color.

Some examples to make this clearer: 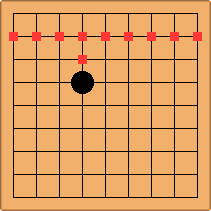 All of this black stone's liberties are external. Shown are paths from the north liberty to the east and west sides of the board. 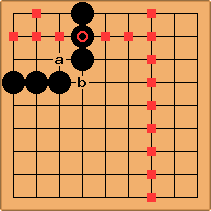 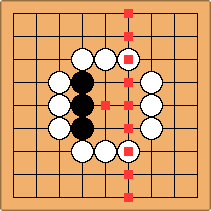 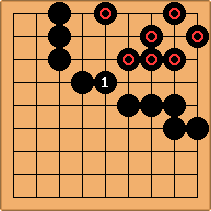 After this move by black, none of the marked stones have any external liberties any more, so they are all captured. 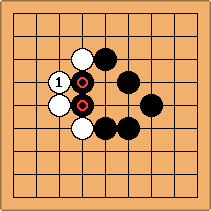 After this move by white, the marked stones are captured, since they no longer have any external liberties. 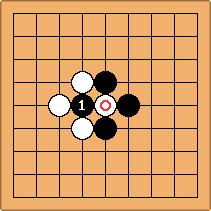 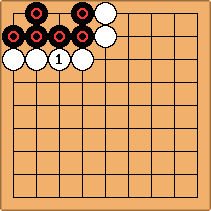 Eyes are worthless in Bridge Go, because they're internal liberties. This move by white causes the black stones to be captured. 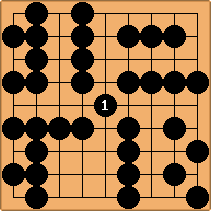 After this move by black, there is no valid path that reaches two opposite sides of the board, so every single black stone on the board is captured. (This move is probably not a very good idea.)

The victory condition is a lot simpler. A player achieves victory by creating a single chain that connects two opposite sides of the board. 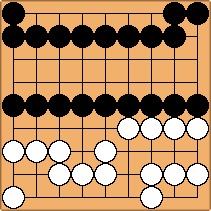 Black has two winning chains here. Both of them win because they both touch two opposite sides of the board (in this case, east and west). The fact that one of black's chains also touches the north side of the board is irrelevant.

White's northernmost "chain" does not win, since it is not completely connected together. White's southeast chain touches both the south side and the east side of the board, but since these aren't opposite sides, this isn't a winning chain. And, needless to say, even though white's solitary stone in the southwest touches two sides, the two sides are adjacent, so this single stone does not win!

The usual kou situations from go doesn't occur in bridge go, since the temporary stone's liberty is internal (see double capture above). However, bridge go has at least one kou situation, shown at the side.

This is a rather rare situation (it's never come up in any of my games), but it's probably worth having a (positional) superkou rule, just to be safe. This all assumes that the go rule of clear the opponent's stones, then your own[1] holds, which I think should. 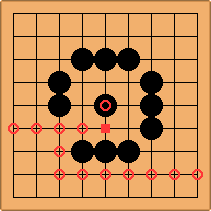 I'm going to try to implement the rules in Haskell (as Tromp did for regular go). I just want to check a few things:

After each move, in general, does every chain of the player who just played have to be rechecked? The total suicide move shown in the article makes me think so. And I assume that, as in go, the opponent's stones are cleared before the player's.

Has black just won, or committed suicide? My vote is for won.

I've been playing this in real life (on various board sizes), and it seems like a good game. However, most of my games have been played with a slightly different ruleset (by accident). How I've been playing it, a liberty is only considered external if it can reach both sides perpendicular to the direction from the stone to the liberty. This is rather counter-intuitive, but produces some interesting play. Here's an example: 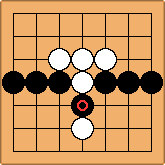 It may not look like it, but the marked stone, under these variant rules, is dead. Both of its liberties are in left-right directions, and since neither can reach the top, they're both considered internal. Admittedly, this has been one of the greatest causes of WTF!?s whilst playing, but the person I most often play with quite enjoys this variant. I think that it costs too much in terms of intuitiveness to justify, but I'm sharing it anyway.

As promised, I made a

Haskell program for playing bridge go. I actually made it some time ago. At the time, I was keen on exotic Unicode syntax, so it requires the base-unicode-symbols and containers-unicode-symbols packages. To play, compile, run, and enter pairs of numbers separated by a comma.