The empty point marked with a red square is adjacent to only one chain. This does not prevent the marked chain from getting its two eyes elsewhere.

The single black stone is necessary for unconditional life.

Example 3: a group that is "alive" but not "unconditionally alive"

The black group is not "unconditionally alive", because: if white has as much moves in a row as he wants, he can capture the stones.

The reason why this group isn't unconditionally alive (according to Bensons Algorithm) is that the two empty points marked with squares aren't liberties of chain c1 (all empty points in the adjacent eyespace(s) have to be liberties of the chain).

For the big chain it is no problem that the point marked with a circle is not a liberty of the big chain, because the big chain already has two (eyespace-)regions (a2 and b1) that fulfill the condition.

Remark on search: This example also shows how much and deep search would sometimes be needed to prove a group of stones is unconditionally alive (or find out it can't be proven yet). The search must consider filling liberties in the correct order (outside first, then inside), and another order could show the group is capturable, even if one certain order does say it isn't.

Note: The number of search could be reduced, by filling all regions with stones all over except at one point. Then trying to fill 1 region completly to see if some groups are captured. If not, then change 1 of the free points in 1 of the filled regions. Thereby it is not nessecary to consider move order. So there are 2 possible outcome of the previous example.

The reason why this group is not unconditionally alive is that

is an empty intersection in the (eyespace-) region but not a liberty of the black chain.

Bensons Algorithm on an unusual goban (1) 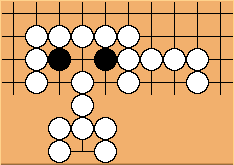 Bensons Algorithm on an unusual goban (2)

In the following configuration: if the two single white stones are connected (through are wormhole in the 3rd dimension for example, so they form one group, but don't have additional liberties than those visible on the board), all white stones are unconditionally alive!

Bensons Algorithm on an unusual goban (3) 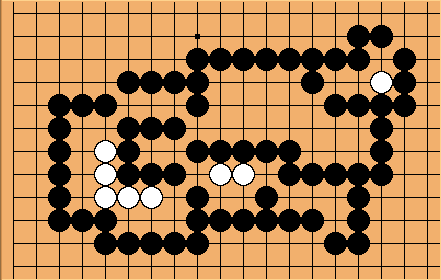 All black chains are unconditionally alive

Here is a more complex example. 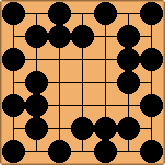