Not much to say at the moment, but I plan to write a page about 13x13 fuseki? soon. I'm a low dan player.

Some examples of black formations to be discussed: 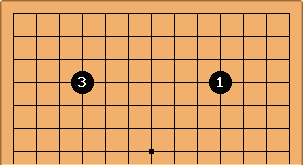 Don't like it much, as it aims too much for development on east and west sides ... Which isn't easy to achieve on 13x13. However I never really tried it. 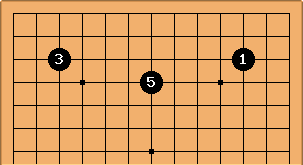 This is the first fuseki I experimented. Might looks good as it secures a side and two corners, but not a very active formation. You won't have the initiative often if facing a good white player. 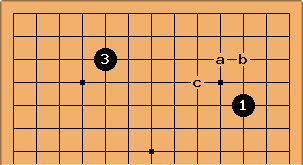 Still having the idea that if a corner is good for 13x13, let's take it twice, I experimented the Nimokuhazushi (2x 5-3) a lot. If white invades at a or b, black can happily pincer and this becomes a hard game for white. But white at c really cuts black stones and I haven't thought of a good way to handle that yet. 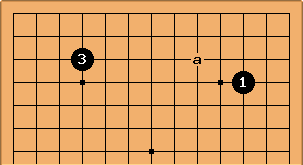 Not as good as the half chinese (which comes next) in my opinion, as there is more space between the corners (too much room for white invading at a). 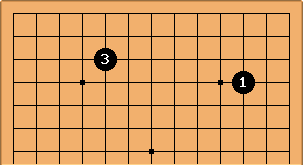 This, in my opinion is better than Nimokuhazushi or Nikomoku fusekis, because of the balance between corners, 5 spaces instead of 6. This is the formation I am working with at the moment, but it's not as easy as previous ones to set up as white can easily prevent it. 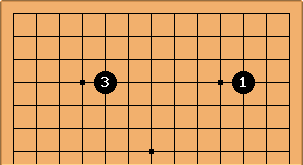 Quite close to the previous one, more oriented toward center though. 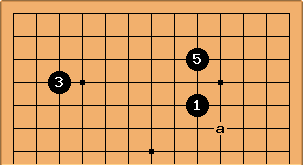 Another formation I like a lot, call for an invasion but it's hard for white to find a way to settle fast. By tewari it seems that 1 might be better at a, but because opponent's corner is so close I think it works quite well that way for 13x13.

Tried it a bit, so far without much success. 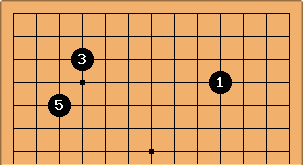 A peaceful developement, haven't tried it yet but looks quite good. 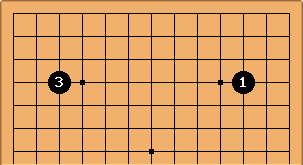 Haven't really thought about this yet. 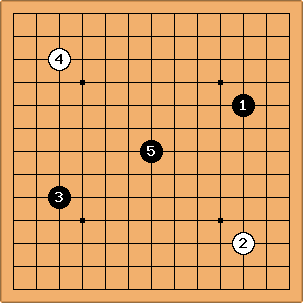 Tengen is easier to use on 13x13 than on 19x19, so this fuseki looks playable and very fight oriented. I haven't tried it yet, but will soon, looks very tempting!