Sanrensei is a Japanese opening term that means "three star points in a row." It's most commonly used to describe an opening pattern wherein a player plays three star points on one side. The sanrensei became one of the defining openings of the Shin Fuseki period and modern era of go. It is extremely popular at the amateur level of play, but it is less commonly used by professionals, especially following the AI revolution. 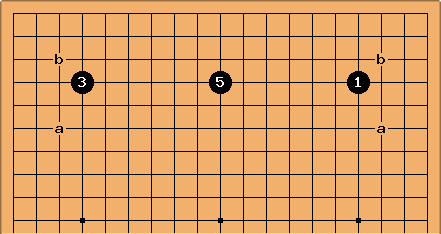 , and is followed by

in the middle. This allows White to take initiative to approach the first corner, which is most properly played at a or b.

It is typically a fuseki played by Black, but it is not unheard of for White to also create a similar formation.

The sanrensei strategy is an influence-based approach rather than a territory-oriented one. The aim is to build a moyo so large that the opponent will be tempted to invade or reduce it. Many amateur and kyu players struggle to perform effective invasions and reductions, so the sanrensei can be an especially effective fuseki for beginners.

When the inevitable invasion/reduction occurs, the sanrensei player will use his influence to launch an attack on the opponent's invading/reducing group(s). Depending on the outcome of the attack, spill-over may occur affecting the opponent's other groups around the board. It is through this process that the sanrensei player will realize his gains.

As such, the sanrensei (and all other moyo based strategies) is a long-term attacking strategy. 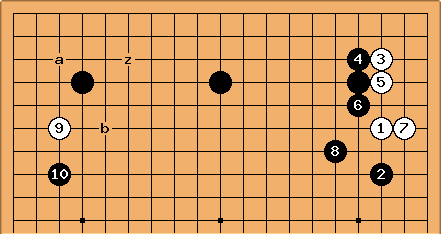 Classic usage of the sanrensei is perhaps best illustrated by the accompanying diagram. Here, Black has pincered the the approach stone with

and White has jumped into the corner. Black blocked with

on the side facing the framework and White chose a sente joseki (see: 4-4 point one-space low pincer invasion, block).

Here, we can see that Black created a wall and is developing a threatening moyo on the upper side of the board.

If White approaches again with

and Black pincers with

, what now? If White jumps into the corner at a and repeats the same joseki as the upper-right corner, Black now has two walls and a large moyo in the center. White will need to gain an equivalent amount of territory elsewhere on the board or succeed at an invasion/reduction in order to win. However, many beginners struggle to play effective invasions and reductions, and it is often attempted prematurely. Proper whole-board judgement is needed to play an invasion/reduction at the right time.

at z to disrupt the framework. However, this is approaching from the wrong side and a mistake (see: BQM 55, Sanrensei simplest comments).

Instead of claiming the corner with a, White can also consider jumping out at b in an attempt to negate Black's central influence. However, this can feel lukewarm because White gained neither territory nor a base. 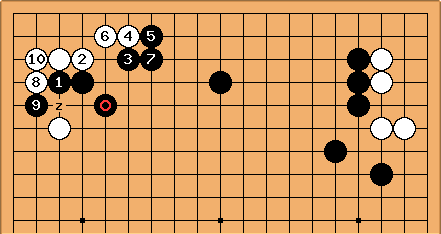 Another famous opening related to the sanrensei features Takamiya's Diagonal (see: Takemiya-style sanrensei). Although this strange-looking move was developed by Takemiya Masaki, it was played quite extensively by many professionals in the early 2000's and it still sees sporadic use by professionals after the AI revolution.

invites White to invade the corner. After the exchanges

, Black should not connect the cutting point at z, as this is too slow. Instead, Black should take sente and play a large point elsewhere on the board. Black's primary moyo is in the upper right quadrant, and it is quite robust regardless if White cuts at z (which is also gote).

Interestingly, Shibano Toramaru (9p) recently advocated for this variation in the book Fuseki Revolution (2022). He asserts that if amateurs still want to play the sanrensei fuseki in the AI era, Takemiya's diagonal is perhaps better than the one-space pincer because White cannot play the AI joseki that leaves an open skirt, and this variation is consistent with the general thematic principles of the sanrensei.

Strong AI programs do not give this style of play a good score. However, AI programs typically frown upon moyo-building strategies in the first place. Amateurs should keep in mind that AI recommends moves with the assumption that both players are as skilled at invasion/reduction tactics as professionals are. Certain fuseki may be extremely effective at the amateur level of play, although it would be ill-advised to attempt playing it against AlphaGo. 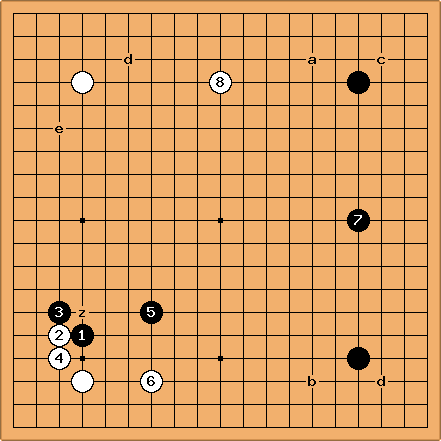 Traditionally, perhaps the simplest way to play against the sanrensei is to develop a competing framework. At one point, it was common for White to also play an opposing sanrensei, which could lead to a yonrensei or the All Stars opening.

It was also common to play somewhere along the side.

, declaring his intention to play a moyo-centric game. The move at

supports play style, as the sanrensei fuseki is well-suited for developing central influence.

Where should White play?

Cutting at z is a trap, as it helps Black build thickness towards the center of the board.

Approaching at a or b might be the ordinary moves, but Black is likely to pincer the stone and develop a wall as previously shown in the traditional joseki. Directly invading at c may be recommended by AI, but doing so will permit Black to develop a wall according to plan. Furthermore, direct 3-3 invasions were not popular in 2011.

White could also consider enclosing the corner with d or e, but it feels like White is starting to fall behind. Black's stone development is fast, so White is under pressure to keep up the pace.

is the game move which serves several functions: 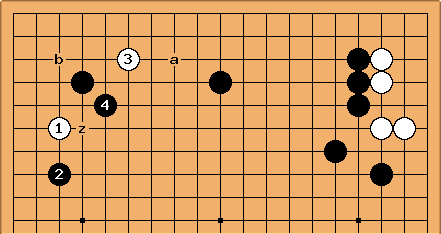 Another historical play against the sanrensei is the double approach

after Black's pincer (see: 4-4 point low approach one-space low pincer, low double approach). It was played extensively by professionals in the 1990's, and it appears to be a special tactic to invade the top of the board, although White will often live small.

After Black plays the diagonal with

, White's options are either to struggle for life on the top side with a or to take the corner with b. The

diagonal move disappeared from the professional repertoire in the 2000's, and it was largely replaced with the more modern attachment at z.

In particular, AI programs think the

Interestingly, the AI evaluation of the

double approach is quite positive, and likewise it is still played by professionals even after the AI revolution. 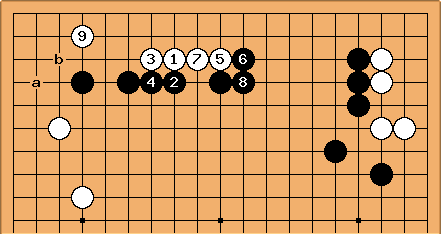 There are several well-known invasions that are related to the sanrensei fuseki.

Cho Yeonwoo (2p) describes the accompanying diagram as the "most common side invasion". The invasion at

has been played by professionals since the 1980's (see:

Takemiya Masaki vs. Cho Chikun (1989)), and White can live comfortably on the side of the board. This particular invasion is possible because Black played the one-space high extension, and White did not exchange moves in the corner (a for b), which allows this particular variation to work. 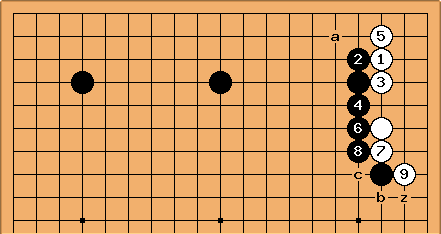 The sanrensei fuseki has almost disappeared at the professional level of play ever since the AI revolution. In the book, Fuseki Revolution, Shibano Toramaru writes that it is established among professionals that it is "hard to win with this pattern".

One reason for this is that AI have revealed new joseki that are effective against the classic sanrensei fuseki. One example is provided in the accompanying diagram, whereby White has descended with

and then bumped with

. Black will typically want to tenuki at this point, as the double hane

at z is gote. Even if Black captures the

stone leaves an open skirt, meaning that the territory on the upper side of the board is no longer secure. White can play the end game move around a to break in. It is also easier for White to invade, since White can threaten to connect back.

Additionally, White is able to break out into the right side with the atari at b. The cut at c is also interesting, and White has forcing moves that they can use to develop some stones that face the center of the board.

In conclusion, this AI joseki refutes the traditional joseki and this position is better for White. 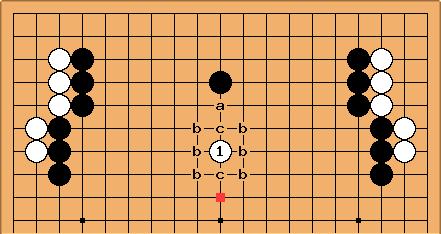 A simpler reason for the decline in popularity of the sanrensei is that strong AI programs value territory more than humans do. The AI is extremely skilled at invasions and reductions, and it is simply not afraid of a large moyo in the way that an amateur would.

In the accompanying diagram, KataGo thinks that White has a slightly better position. Even though White has played two 3-3 invasions and allowed Black to develop large walls exactly as planned, strong AI programs simply aren't concerned about Black's moyo. In contrast, there are few humans that would argue that direct 3-3 invasions of both corners is the best strategy to play against the sanrensei fuseki.

KataGo recommends a reduction at

(or alternatively a-c), which from a human perspective is uncomfortably deep inside Black's sector line. Black is likely to play a capping move around the marked square, which may result in complicated and difficult fighting. While professionals and strong AI may be able to thrive in such a situation, it can be very challenging environment for amateurs.

Should I play the sanrensei?