DaveSigaty: Recently I have been playing the following combination of 4-4 point and 3-5 point as White against Black's nirensei fuseki. 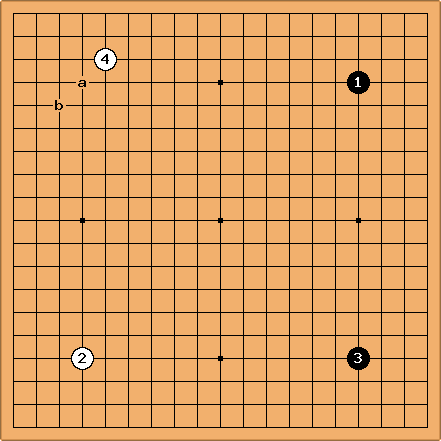 This idea followed a period in which I answered

and a. This is a very common choice for White but I think it gets boring after a while.

My first idea to change was to switch from a to b hoping to get the chance to play the taisha joseki (I came up with plan after reading a book on the Taisha by Ishida). There are a couple of problems with this plan:

So finally I settled on

Bob McGuigan: This is a pattern I like to play, too. It is half of the "crab's eyes" pattern, where both white corners have 3-5 point stones. This was somewhat popular 30+ years ago as an anti-ni-ren-sei strategy, the idea being that the 3-5 point stones erase the influence of the black star point stones.

AndyPierce: I also have been playing this lately as white and like it a lot. In my IGS 6k experience, you don't have to plan to play the taisha because everyone at this level is scared of it, so you can plan for black to avoid it. All the avoidance lines make it easy for white to develop the top, which was the intent of the 35 facing the nirensei all along. Hearing that vastly stronger players than myself consider this approach for white reasonable is encouraging. 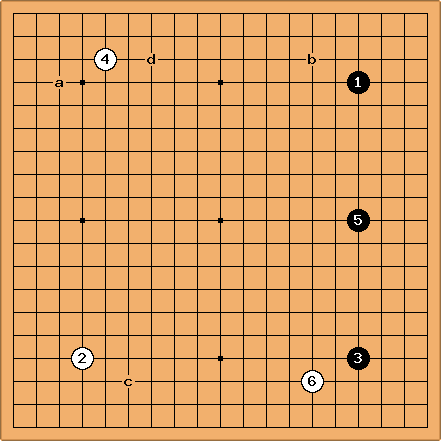 An example for the sanrensei fuseki is given at A 4-4 and 3-5 strategy, example 1

BillSpight: I would tend to make the enclosure, expecting a wedge, and then play at

; but I think that

is good, too. I think that the bottom is bigger than the top. Black has a good kakari at c, but a kakari at d is not so good. 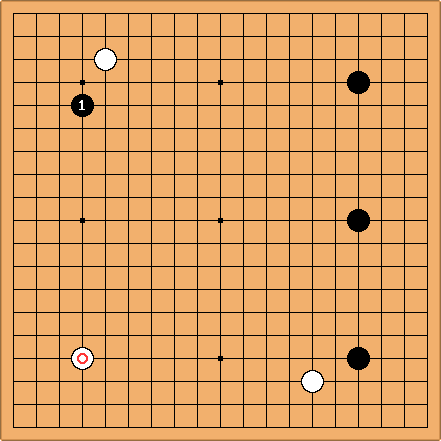 for Black, given the

Bob McGuigan: When I use this opening I almost always close the corner with

. This is a territorial move, obviously, and the solid upper left corner makes a white play at the star point on the left side bigger than it would be in a san-ren-sei formation. So Black usually splits the left side in response. Furthermore, the 3-5 stone in the upper left spoils the upper side for Black development. Dave's

approach is also a good move because it takes the initiative on the lower side which is Black's best area for development after the W 3-5 move in the upper left. 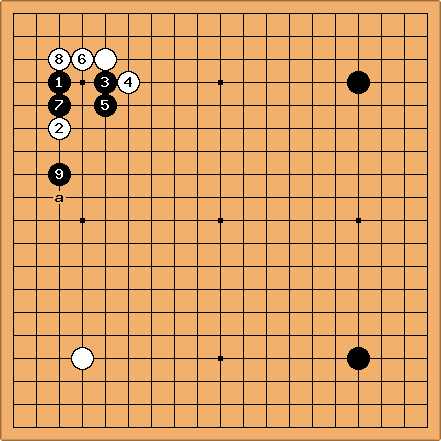 with the one-space low pincer at

The basic idea is to press Black hard and build positions on both sides, one at the top negating the influence of Black's hoshi in the upper right and the other combining with White's hoshi in the bottom left (developing on both sides. However, in practice there is a dilemma here.

In playing this at the 1k level on IGS, almost always (I have reached the point of

. This is called an inferior choice by Ishida's Joseki Dictionary (vol. 2) and I agree. Although there are alternatives for White to choose, in the simple variation shown White takes the corner and ends in sente. Black can not extend any further than

(if even a, for example, White is left with the opportunity to play

later). White turns next to deal with the right side.

The dilemma is that after encountering this same approach by Black so often, I now find myself using this strategy in expectation of an inferior reply from Black. Thus I have allowed myself to be seduced by the idea of a cheap advantage away from the original quite positive thinking (in my humble opinion at least :-) that got me involved in this strategy to begin with.

So what do you think:

Interestingly enough (at least to me! :-) Go Seigen analyzes this position in A Way of Play for the 21st Century. There are (at least) two very interesting points: 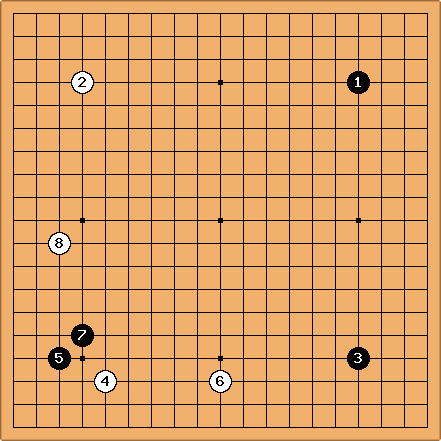 First he tosses out this position in setting the stage...

"The standard black response has been the territorial play at

(komoku). After Wh6, Black would play kosumi with

, attempting to get the best of it with this strong shape. However, this would allow White to occupy the big point (oba) of

, so White would have a lot to hope for as well."

Which is completely different from how I've been looking at the situation for the last year or so. 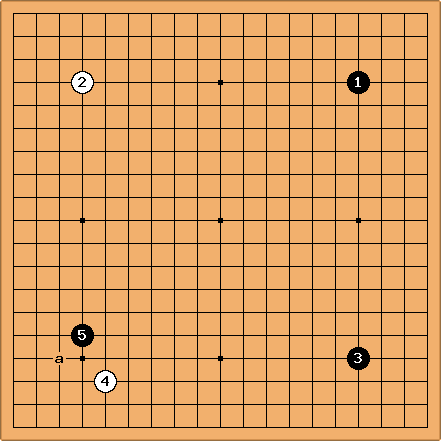 His main point, however, is that

here rather than a "is simple and clear, and won't result in a loss, so I think it is very interesting." 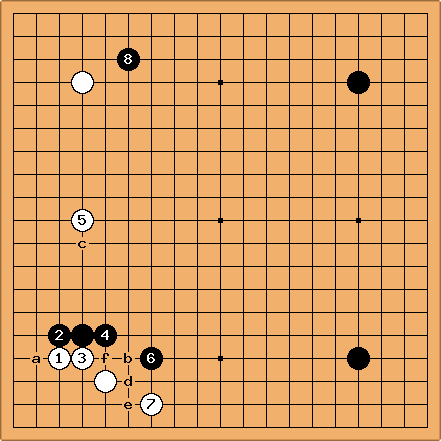 Go then presents his analysis of choices available including: - Why

instead of the normal joseki move at b? (better balance)

instead of the normal pincer at c? (because White is willing to let Black build a wall and wants to counter it from a distance)

instead of the normal joseki move at d? (because d falls into White's plan of allowing Black to build a wall in gote, and then take the initiative elsewhere)

- If indeed Black d why should White use the submissive e instead of the normal joseki move at f? (because if Black responds correctly the "time-honored warlike joseki" of f followed by the cut is not interesting for White)

- Etc. - some of the analyses runs along for over 40 moves from this position.

"A Way of Play for the 21st Century" is all about different ways to look at Go. Nevertheless, this is one nice example (amongst many) of rejecting the joseki books and relying on an analysis of the whole position on the board and the opportunities that it offered.

DaveSigaty: I am not too modest to report that this strategy has now received perhaps the ultimate accolade in amateur Go!! Yes, it is true. Hikaru used my fuseki in volume 9 of Hikaru No Go. Specifically he plays it as White in his game against Hon Suyon, the Korean Kenkyusei (insei). Although it is not possible to tell from the manga, the new Hikaru No Go/Gorgeous Characters Guide gives the game diagram - see below. 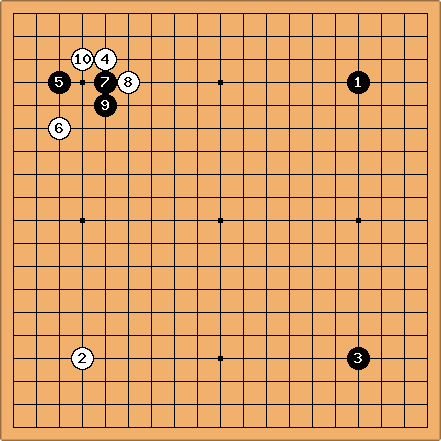 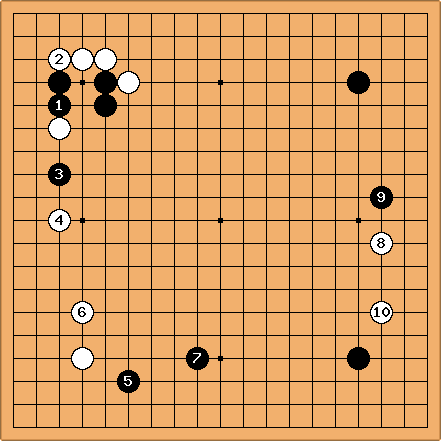 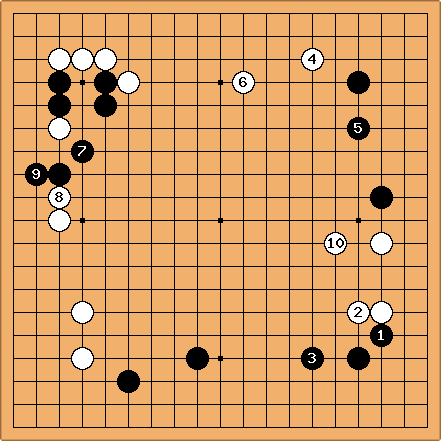 We still haven't identified the original source of this game so if it looks familiar post what you know on Hikaru No Go/Games.

Charles On the basis of a database search: 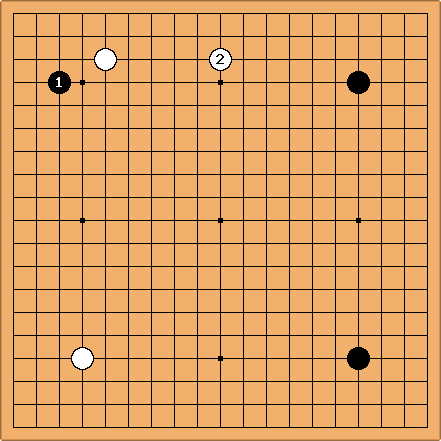 The widest path here from pro games is clearly enough

to take up position. 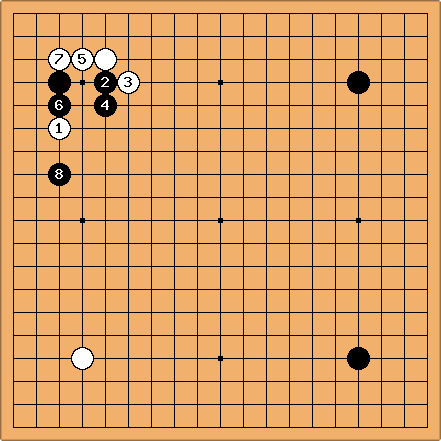 There are not so many hits for

here. But of those (I'm using GoGod) the two ones from the past decade go this way.

Therefore I'm not convinced this is losing much for Black.