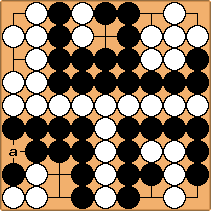 Black has 38 points and White has 37.5 points.[2] The player who wins the KO (at bottom left corner) wins the game.

Black can never fill a after winning the KO, otherwise he dies.

On the other hand, White cannot remove the KO either. If White wins and fills the KO,[5] then Black doesnt need to keep any KO threat and Black can capture the two white stones at the top. After all, Black gains more (4 points) than White does (1 point).[3]

This beast challenges Ings and Spights rule, which assume every "single KO" can be removed if playing reasonably, which is not true.

Bill: IMHO, that is a mischaracterization of both Ings rules and mine.

Patrick Traill: To amplify Bills remark, his proposed amendments to the Japanese rules are in the article Spight Japanese style rules; other proposals by him, with some comments and discussion are in Spight Rules (a superko proposal and a two-pass end-of-game rule) and Spight Rules II (which treats the End of Game Ko Rule and the Superko Rule, both forbidding some repetitions). I thought I might try to track down where those articles assume (explicitly or implicitly) that kos are always removable. It turns out that there is a lot of quite dense text giving various ideas and proposals and loosely structured discussion, making it seem more trouble than it is worth (to me). I now feel that the onus is on anyone supporting the above claim to point out the places in both rule sets where that claim is stated or implicit. It seems to me that the ko rules will not make such an assumption, merely stating what repetitions are forbidden. In Spight Japanese style rules  Article 6  Comments, I see kos should be settled before the encore  perhaps this is what is meant.

Patrick Traill: On a lighter note, I have to remark on the powerful B2 Bomber lurking in the SW black stones; indeed, it is but one stone off a full 4-3-2-1 bomber!

? I dont get it. Cant Black just take the two white stones, let White have the ko, and win the game?[4]

Answer: If Black captures two white stones on the top, he will lose one KO threat.

In conclusion, if Black captures two white stones on the top, Black will earn "4.5 points" + "bottom-right corner", and lose "bottom-left corner" and eventually lose the game.

[4] He already has won the game (38 > 37.5 :-).
However, the question remains, why does the design offer Black no incentive to take two?
Lets change the komi to 1: If nobody moves, its jigo. Both are scratching their head.

Black could consider to gain 5 by taking 2 at the top (after which White throws in and Black takes again). White, being behind, is forced to take the ko and approach. Black takes back and, surprise, White almost fills the seki in the bottom right. No matter what Black now takes, hell lose with 8 + komi.

Conclusion: if komi is 1, both will leave it at jigo.

[5] If, however, the rules somehow enable her to take the ko and end the game without having filled it (preventing him to take 2), she indeed could win (with 3 + komi)!