On this page I'd like to discuss a tournament game of mine against a fellow shodan. In the top right corner I deviated from joseki to see what happens but also with a second agenda. In the ensuing corner sequence of 25 moves, we managed to produce no less than seven mistakes and probably more, for those seven were the ones our fallible shodan eyes saw.

What martial art has their black belts [1] perform at an error rate of 28 % ??? This is at the same time most disturbing and very motivating. Here comes the analysis. 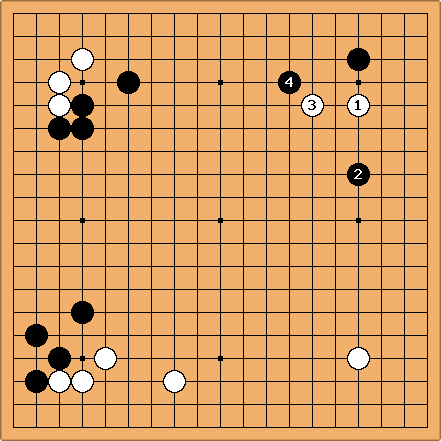 seemed to use the black thickness properly. White jumps out at

is possible, but the ensuing joseki gives a strategically bad result. 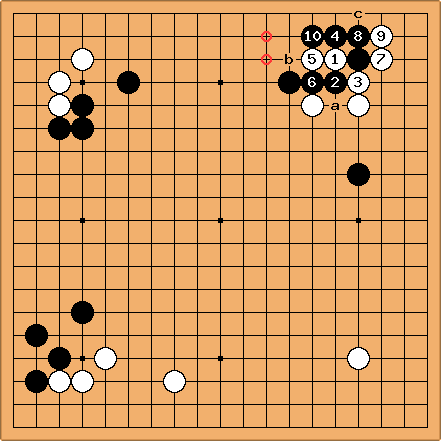 White 11 at a. Black takes territory but there is aji in the captured stones, namely when White gets a stone at the circled points. If

at b instead, White c gives Black a feeling of Overconcentrated shape. Of course, this error is not nearly as grave as the blunders that are to come. Black still has a game. 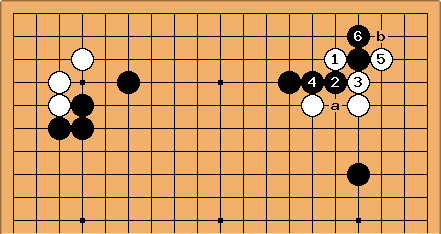 entails a local loss, but in fact it is consistent with my hidden agenda: push through at a. So, not such a bad mistake after all. However, if

now at b, her territory will be superior to Black's influence. 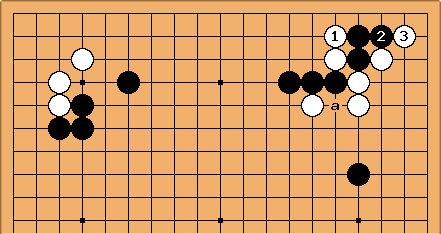 works locally but also increases the corner aji and Black will now cut at a more effectively (see later). At the time of the game I thought

did not work and I drew out my stones, which is actually good because of the aji.

correctly states that she will capture the corner.

Diagram 2 shows how Black gets the most out of this position. 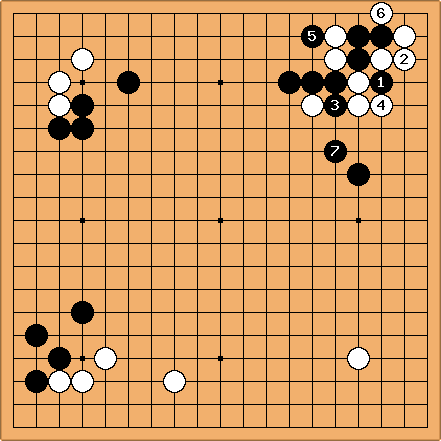 creates too much aji for her to stretch. Black then plays kikashi at

and gets nice outward thickness. 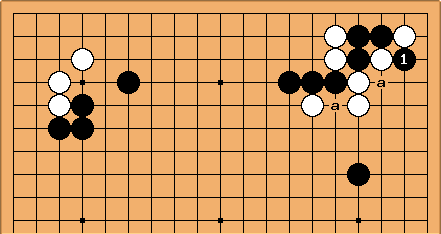 does not work. Diagram 3 shows why. Moreover, there is less aji in this stone. 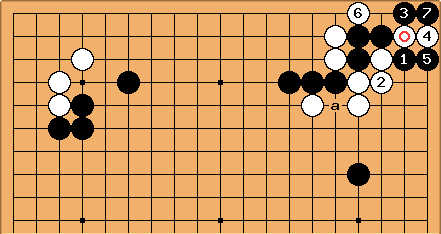 . This becomes a two-stone edge squeeze. 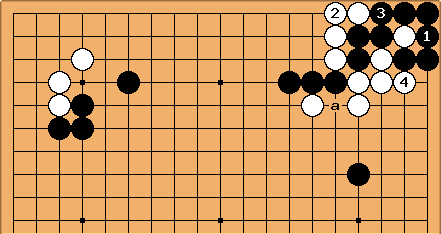 White wins the capturing race by one liberty. 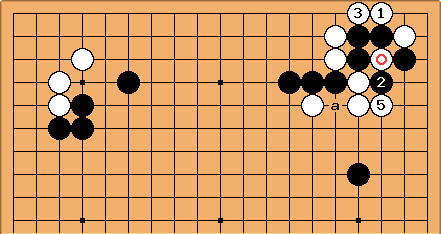 ) Sure enough White makes a fifth mistake and now Black has his chances. See Diagram 4: 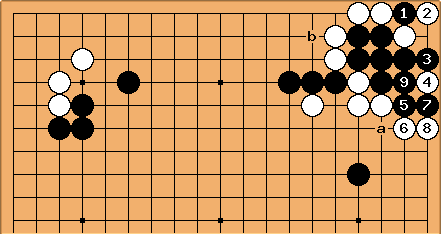 is tesuji. Whatever White tries, after

she has to protect the cut at a, upon which Black gets ahead in the capturing race with b. 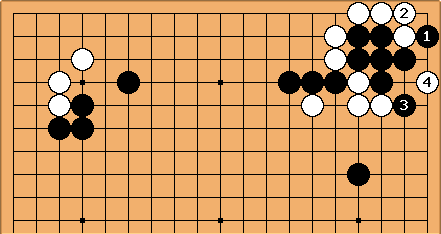 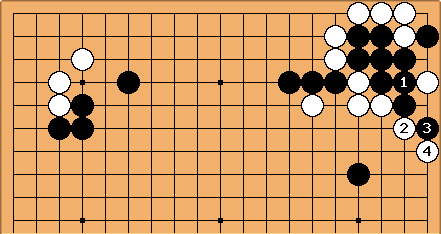 The first-line hane of

enables Black to get ahead in the capturing race, or get an overall advantage, or take everything in ko. See Diagrams 6, 7 and 8. 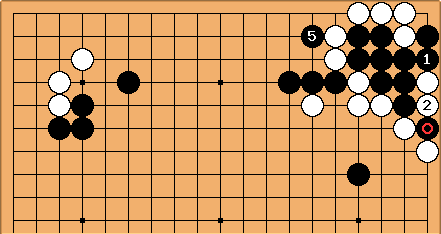 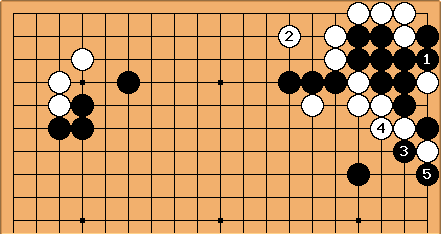 Black links up and will most probably capture one of White's groups. The only resistance White has is diagram 8: 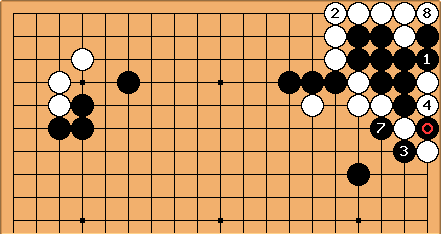 So early in the game, there is no ko (there are no ko threats in the opening). 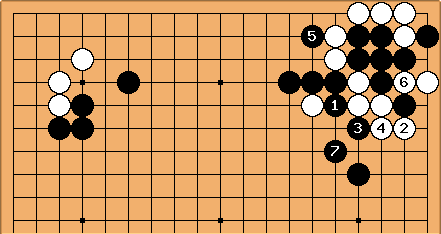 Seventh mistake: Finally, I decided not to take any risk any more and forewent the first line hane. I pushed through at

I obtained substantial central thickness in exchange for a big corner. Numerous blunders would follow however, eventually leading to a well-deserved loss.

tderz: [1] I quote a JiuJitsu? teacher: "Congratulations, now you are Black Belt! Now you can start learning!". (I am not that black belt). However, this is the whole point of it: Go is an art too, we can never stop learning (at least not by saying "Now I know it all"). If Cho Chikun says that he doesn't know (understand) much about (of) Go - to quote him incorrectly - then this is not only modesty of a top player of the last century, but also a partial, absolute truth.

Martial Arts require that one has to stay physically fit.
I would not know how to define an error rate in martial arts (no help here).

Unless practiced for their athletic/aesthetic value only, martial arts are about fighting, and in a fight there is a long sequence of moves and countermoves and lots of room for strategic and tactical mistakes. Example: a feint nees to be executed like an attack. If the opponent can see it's a feint, (s)he need not reply in the intended manner. So, you could define an error rate by decomposing the action into a sequence of moves (fencers call this a 'phrase of arms', but the concept extends to any form of combat), and deciding whether each move is correctly and timely executed. -- Migeru

Despite the differences in rankings/gradings in different countries (what does this Dan mean? A Korean "2 gup" can win vs. a European 3dan) anyway can replay professional games and ask himself "How much do I understand of what/why they are playing?".

If even tactics, which are locally solvable, are not solved correctly, how can then the strategies - deriving from them and vice versa influencing them - be correct?

Similarly, if I comment a game of someone taking 4-6 handicap stones, sometimes they talk and talk, explaining their thoughts. While I think it is necessary to know what s.o. thought about the game - in order to check whether it is "correct", too much is sometimes just confusing - them and me.

ilan: I was thinking: "you know you've made an error in martial arts, if you're dead after the fight." But actually, I think you can lose in martial arts without having made any mistakes, except picking the battle. In particular, if you choose to participate in a higher weight class.

chrise That's nothing. In my games 30 mistakes are made in the opening 25 moves!