I watched this game on IGS in September 2000. It is between two 4d*'s. Both were short of time. The game is finished except for the final ko at 1. The whole board situation is a half-point game: whoever wins the ko will win the game. White plays a ko threat at 2. If this is a real threat then Black does not have enough threats to win the ko so he connects at 3. What is the status of the corner - what should White do next and how does it turn out? 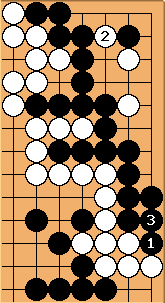 Bill: I believe that the string of black stones in the top right has only one external liberty (shown in the diagram), but that is not clear from this diagram. It might be better to enlarge it a bit, or edit it to make a similar diagram with the same problem.

According to what's shown in the solution, it seems to be...

Here is game continuation but is it the "solution"?