The 3-4 point high approach inside attachment is the most common response (~60%)[1] to the high approach. Joseki that branch from this position are played at all skill levels, and the attach-drawback joseki is typically one of the first joseki that beginners learn.

The inside attachment is territorial and allows Black to take a large corner. At this point, White can chose to develop influence on either the top or left sides. The hane is most common, usually the best option, and establishes a position on the top. Alternatively, White can switch the direction of play by bumping on the 4-4 point to take influence on the left side, but this is a local loss for White, and it can also potentially lead to the notoriously complicated avalanche joseki. 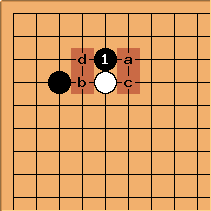 The small and large avalanche are notoriously complicated joseki that were historically the primary way for White to change the direction of play when approaching a 3-4 point. It is somewhat difficult for White to get a good result after bumping at

Avalanche joseki are currently out of style (2021)

As of 2021, complicated avalanche joseki are currently out of style. Takemiya Masaki is famous for saying after the 1988 honinbo final, "I will never play nadare in my life again. I dont like large scale joseki since its complicated and it settles too much of the board. For beginners I recommend just to play the simple variation (descend variation)." Likewise, Takemiya's recommendation has stuck, and the descend variation is now the dominant variation in modern go. Although the descent was historically viewed as an inferior result for Black, the AI revolution has revealed that it is not as bad as previously thought, and professionals now play it on a regular basis.

Despite the current popularity of the descend variation, it should be noted that the avoidance of the avalanche is merely a trend. Strong AI programs often prefer other moves, and the avalanche joseki are theoretically slightly favorable for Black. It is best to view the small avalanche and large avalanche as fighting joseki can be used to punish White if the surrounding board position is favorable. However, Black does not need to punish White to feel satisfied, and Black is already reasonably content playing a simple variation.

The large avalanche is probably close to obsolete in modern go, and White rarely has a reason to ever play it. Strong AI programs seem to believe that it is best for White to play a simple variation, and White typically wants avoid the large avalanche.[3]

However, it is important to recognize that this "meta" is based upon the presumption that professionals and strong AI programs are all familiar with the optimal large avalanche joseki. It could be argued that all of this is irrelevant for an amateur player, and avalanche joseki generally favor the player with stronger reading skills or studied these joseki more extensively. Theses variations are therefore a method to start a high-stakes fight.

It is useful to study the small avalanche joseki because it is possible for Black to unilaterally force this variation, and there is no way for White to simplify the position. Learning the small avalanche can therefore be a practical skill at the intermediate/advanced levels of amateur play.

Practical notes on the small avalanche 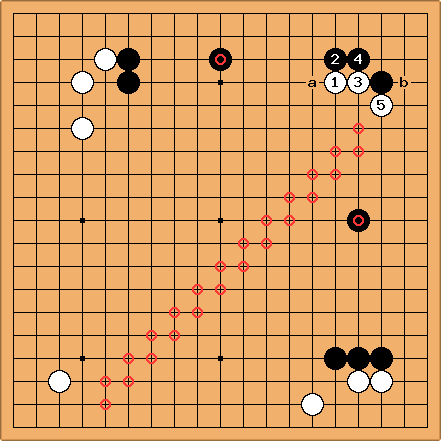 , as sometimes the result can be terrible for White. By corollary, recognizing the right situations to play the hane can be a useful tool to have in one's toolbox, since it can be a severe move to punish White.

In Dia 1, Black is forming a moyo in the upper right quadrant of the board. White plays the high approach

to form the avalanche precursor shape. White hopes that Black will play the descent at b, as this popular joseki variation will allow White to settle easily with a group that effectively reduces the majority of Black's potential.

However, a prudent player would notice that Black has additional stones (

) near the vicinity of the upper right quadrant. Many of the complicated avalanche joseki occupy approximately a quarter of the board, so any additional stones on the sides are likely to have dramatic effects on the joseki's favorability.

On an empty board, the small avalanche is already considered an even result for both players, and it typically leads to the mainline variation (shown below) when played conservatively. The current main variation ends with White handling two weak groups on each side, while Black has one weak group in the center. If the player imagines this variation played out on the board, we can clearly see that the small avalanche would be a disaster for White.

In fact, Black can do even better than the conservative mainline variation. If Black has any support (even only on one side), strong AI programs begin to recommend to the violent fighting variation, which is even more severe on White but far more complicated. Understanding this requires good reading skills, as the fighting variation can potentially involve side trades and pushing battles. For instance, the fighting variation is recommended when the small avalanche is played in the Chinese fuseki, since Black's extra fuseki stone on the top side will eventually function as a free yet critical move in the ensuing fight.

The last noteworthy mention is the ladder, which is a currently a minor consideration when playing the small avalanche. If White has the ladder, White has the option to play the (good) ladder variation, which gives White a slightly better position in the center if Black chooses to play conservatively with the safe capture at z (old joseki). Historically, this slight difference was significant enough that professionals would not play the small avalanche if White had the ladder. However, AI has altered this view, since strong AI prefer to fight with the turn at

instead of defending at z.[3] Consequently, one simplified interpretation is that playing the ladder variation encourages Black to fight. Nowadays, many professionals opt to play the tiger's mouth (main variation) even if White has the ladder, and Ryan Li (3p) says: "Some players like to play the extension if White has the ladder, but this is a common misconception. The tiger's mouth is almost always better."[2]