Here's an example of a tewari analysis of a corner sequence that fits the second category of tewari. Following is a joseki for the situation when Black has a 5-4 point stone in the corner and also one below the star point on the side. This is considered at least adequate for White, even though Black's stones seem to be working together well. 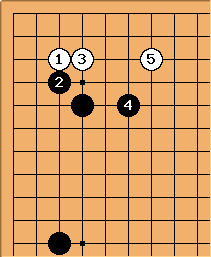 The tewari analysis says the previous diagram is good for white because it could arise as follows: 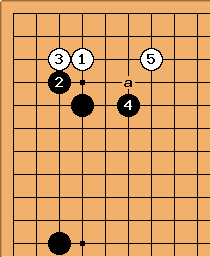 In this case Black should not have responded to

, but rather with a, which would give Black a much better result. Since the diagram position arose from Black not playing the best moves, and White's moves are natural responses, it is good for White.