aLegendWai: This way may be a bit worse than squeeze tactics. If W treats its stones lightly, it can use sacrifice tactics to make gains. 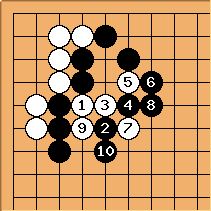 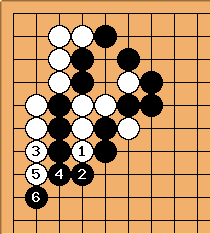 allow W to gain a few points. You know, a few more territories can determine the wining or losing of a game in pro world.

The above can be acceptable especially the influence gained by B doesn't affect W much (because, say, the surrounding area is already B). And B is forced to be somewhat overconcentrated here.

crux: As it stands, the diagram is an unmitigated disaster for White, who gains nothing at all in exchange for making Black stronger and giving him many additional prisoners.

Overconcentrated shape is not an issue as long as White does not gain anything from the moves he makes and Black just replies to them.

This is also not an example of light play. At best it's aji-keshi.

Charles It's an example of bad play. Anybody who thinks otherwise can improve quickly by dropping the idea that forcing play is necessarily good.