(question: is a stone allowed to move along any unblocked pathways in any direction? or can it only move forward and then to either side?)

I would say the first. I.e. as long as it can 'get there' from the 'home' edge, it can do as many zigs and zags as it wants to.

It will not really make any difference from normal Go until there are enclosed areas of the goban.

Hmmm, interesting variant! However, it looks to me Black can always make a (semi-) connected line of stones across the board (say from A7 to J7) after which White will have a group of at most 8 stones on the lower edge, which he can't reach any more.

If I were white, I'd play 2 above to force black back.

If my analysis is correct (?), the game could be made more interesting by giving both players a few stones on the board in advance, or having the hoshi points as starting positions instead of the edges. Just thinking out loud...

MortenPahle: I think you are right. This means that the game will be different from normal Go straight away. White will indeed have to stop black from making a line like that (After all, a black line on the top row would block white in completely...). Hmm

JanDeWit: I've thought about it some more, and I think Black can win very decisively by filling the ninth row directly. The only thing Black has to do is to take care to fill the corners last!

All White can do to stop Black is trying to give atari (I disagree - see below), but since Black didn't start in the corner, he can always run away like this

Other moves by White fail as well, either by getting atari'd herself, or by not stopping Black from filling the top row. The best result for White I can think of is making 8 points along a side edge, while Black fills the ninth row.

So in this form it really makes for a boring game!

JanDeWit: I didn't notice you made a move. It's too slow I think (doesn't fill up an escape path for White). I'll play 4.

MortenPahle: With your example above, you have forgotten that white may play like this (or similar) - in any vase white can stop blacks advance on the 1st line. As always, the best way to attack is by not touching the stones you are attacking. Since this doesn't work for black, he shouldn't play like this.

JanDeWit: Are you sure this doesn't work? I would just ignore white's play and go on blocking the upper row. Black needs six moves to do that, during which white may well capture 1 and 3, but where does that get him? After 4 moves by each, I see this situation:

After 1, white could play F7 but then Black

. Now the circled group is dead and white has made 14 points of territory for a grand total of 16 points. Woohoo!

White could try to get to the first row, but that doesn't work either: 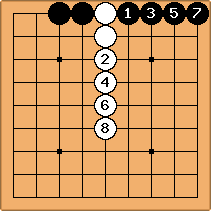 Black will fill the ninth row, leaving white with a dead group of 8 stones.

I still think Black always can win by a big margin. Then again, I might be missing something! We'll see how the test game goes... 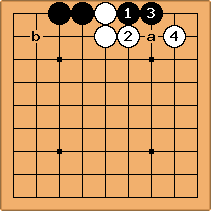 MortenPahle: This deviates slightly from Go as we know it :-) I was hoping to just change the way some moves were played, not make the game into a 'connect the sides' race :-) The problem is that white can easily capture black on the white 'home side', but that leaves a white set of stones blocking her 'exit path', which is just as bad. The rule should be adapted to something like: The stone should be placed on the 'home edge', or next to a stone of the same colour connected to the 'home edge' and then slid across the board to its final posisiton, sliding along the lines only.
In this case, instead of white 2 in your example, she should just kill Black by playing as shown on the left (of course White 2 at a works as well).

JanDeWit: But after White 2, wouldn't Black go for the other edge with b? Since the whole 'fill the edge' approach doesn't work, Black should not be playing any of these moves :-))

I agree about the rule change, I had been thinking about having the side edges as starting edges for both players. Maybe it's time to start a new game with new rules?