It is said to be negative, but in my[2] humble opinion that takes into account only for its efficiency in jumping towards the center. One prefers to jump as far as a, making a horse head shape.

John F. It's true that it's said to be inefficient, but not in the sense of not jumping far enough. When there's a better move it's usually the ikken tobi. However, you need to be aware that there is a pun involved, Another word tokkuri means careful, serious, plodding, and this is probably where the negative overtones have come from. Incidentally, some of the shapes below are not tokkurigata in my view. From what I've seen the term is used only of jumping into the centre, and also with no other stones attached.

HolIgor: Everybody knows the proverb that sake bottle is negative. A difficult thing with the proverbs is that they should be reinterpreted, formulated in terms that are closer for your individual thought pattern. Any proverb and this one in particular should be understood. So why is it negative? Your opinion is that it is just worse than the horse head shape. That is good enough reason, of course. The question is in the efficiency of stones. But that could not be all of it. Other people say that it is not a good eye shape. Is that true? I have a feeling that since this... (lost some text here)

Of course, these discussions are empty without opponent's stones and your own support.

Bill: Amen! Haengma may be different, but discussions of shape without regard to local context can be quite misleading.

There is another proverb: strong players play straight, weak players make diagonal moves. One day I'd like to discuss this obscure statement too.

This page for a discussion on the sake bottle shape.

SnotNose: Here are three examples where I believe the sake bottle shape is good. Am I wrong? Do I have some unlearning to do? Comments from stronger players appreciated. 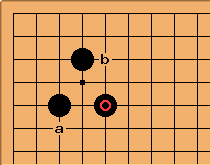 is one of the key points for attack/defense when Black has extensions along the top and left sides.

Sebastian: Why? Can someone show this in context, please? (Someone just moved this question down - why that?)

SnotNose: I won't get into it too deeply because I don't know all the variations. However, imagine that black has an extension down the left and top sides (perhaps at the star points). Then, a white move at

has follow-ups at a and b (and perhaps elsewhere). White can make sabaki and/or invade the corner, depending on black's responses. This sort of thing is covered in books such as Enclosure Joseki.

Bob Myers: This may be a good move but as John F. mentioned it's not considered a sake-bottle/sake-flask shape, since it was formed in the wrong order and points the wrong way. 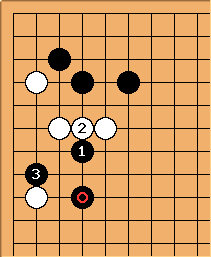 are a common continuation after this well-known two-space high pincer joseki.

Bob Myers: This may be a good move but as John F. mentioned it's not a sake-bottle/sake-flask shape, since it's attaching on an enemy stone and pointing in the wrong direction. 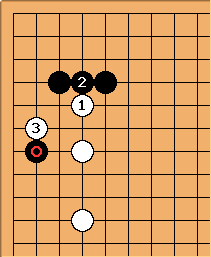 After a typical Chinese opening exchange, Black might try to get under White on the left with 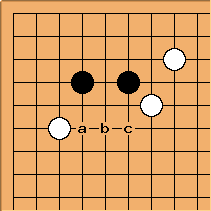 Charles Matthews The textbook example is this position, where Black must avoid being shut in, and chooses between a, b and c. Black at c is emphasised as an example of good shape. 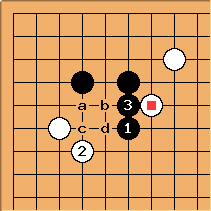 here is a 'tempting the opponent to cut' play. What would the correct technical term for this be?[1]

Sebastian: Is there a name for the black shape that

forms with the existing stones? Why does

? To me, intuitively, it seems a bit weak.

Charles: No - a thick play, reducing

to an ineffective play. Sebastian: Sorry, I meant

seems weak. So does it make use of

(in a wider sense sacrificing it) or does it waste it?

a standard shape. In relation to making a double peep next at b, it is correct. Also one sees this kind of diagonal in other cases, for example easy way out of a double kakari, when the immediate threat to cut doesn't work.

But apparently, it does make use of

- at least I couldn't find good follow-up moves to the alternatives a-d.

, because bad things will happen to her stone on the left side. So then

is honte: good firm shape. Black will welcome this if he can attack on the upper side. 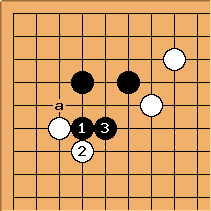 This is clearly another way to create good shape: with

a table shape Black feels confident defending here with good follow-up plays at the bulge point a and out into the centre. 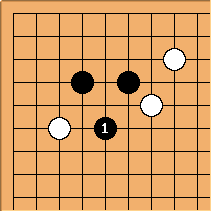 
It is less obvious that it works well, analysing it as functional shape, or in terms of attack and defence. It has been played by a couple of top players, notably Ishida Yoshio who is quoted in a Go World article as saying that it really doesn't lose anything.

Alex Weldon: The thing that confuses me about saying that this is a bad shape. I remember reading somewhere on SL that reductions of good shape (ie, a good shape, minus one or a few stones) are also good shape (because they can become a good shape), while extensions of bad shape (ie, adding one or a few stones to a bad shape) are also bad shape. Now, the tortoise shell is supposed to be good shape. It's clear that the sake bottle is part of it (actually if you look at it, the tortoise shell is a sake bottle mirrored about the line through its center of gravity)[3]. So, obviously, saying that a reduction of good shape is also a good shape is not always true.

Charles Alex, the reason you find that confusing is that the principle stated isn't true. It might be half-true: a partial shape that can't develop into a good shape may not be good. But the other way round? I don't think that's sensible or acceptable as an abstract principle.

Alex Weldon: That's basically the conclusion I reached. I suppose that you must take everything you read on SL with a grain of salt. Incidentally, the original phrasing of the "proverb" I mentioned was: "All subsets of the basic five shapes are good shape," and appears on A Static Treatise on Shape. I've added a note on that page that the statement is controversial, and added it to the controversial statements page.

Dieter: At the same rate, you can argue about the goodness of the five basic shapes. I have gotten more and more sceptical of the article, which is the basic reason why I moved it to a separate page instead of having it dominate the shape page. Take the tortoise shell. It is only really good shape after the capture of two stones, meaning that the "subsets" pseudo-rule requires enemy stones to be in the subset too, if only that.

Once I was a true follower of those static shapes, but not anymore. I have come to appreciate the dynamic nature of shape, mainly through reading divergent opinions on SL.

KarlKnechtel: Funny, the thing that confuses me about it, is how you get a 'sake bottle' shape out of a triangle of three stones. But then, I have never been so lucky as to see a bottle of sake, much less try the stuff ;) So I wouldn't know what the bottle looks like. Or is this something like the imaginative names given to the constellations? (... Hey, now there's an idea. The table shape rather reminds me of the Big Dipper, for instance.)

Kgr?: Here is a nice one that I found via google images:

http://www.yokodana.com/catalog/798/
Most Japanese restaurants have the stuff, I think it's rather good.

[1] That is, how to catch the haengma feel of the play. Giving the opponent a chance to play strong-looking plays that are bad - one name is 'bull-fighting'. A mixture of inducing and trick play is one more description. A special term I like is tice, which is a technical term from croquet, I believe. Perhaps enticing play is more likely to catch on.

[3] Sebastian: Alex had originally "just beside the one-point jump part)". I took the liberty to change this because I thought it subtly reinforces his argument while adding a little tidbit that demonstrates its geometric beauty. A pity, though, that Charles refuted the argument.