Reconstruction Of The Pi Game

What else have I got to do but... reconstruct the game of go being played in the movie Pi!

Someone suggested that the game was copied from a game by Shusaku. That does not seem very likely to me considering the board positions... but oh well... judge for yourself :)

Warning for beginners. Do not try to learn from these diagrams, most of the moves played are unrealistic.

Funny thing is, the credits list 3 'go advisors'. I think that less would have sufficed for the result. -- JuhoP

The first shot of the go board. 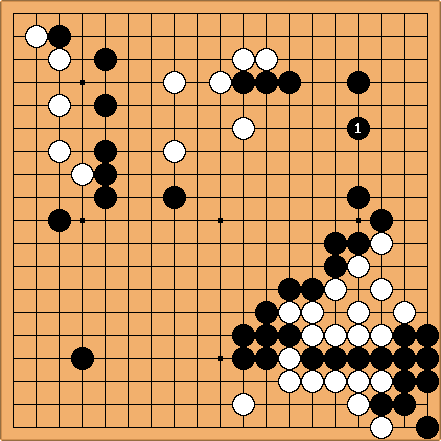 It's uncertain where the prisoners came from. They could have been the result of some complicated fighting near the lower right corner.

Okay and now there's trouble. The next white move can't possibly be played in this position.

The shot of the move being played looks like this:

This position is nowhere on the board. It seems that in reconstructing the the position for this close-up the upper left was shifted one row down. Another problem is that w2 does not appear in all of the next whole board shots. In various shots it keeps jumping from 2 and x in diagram 3. 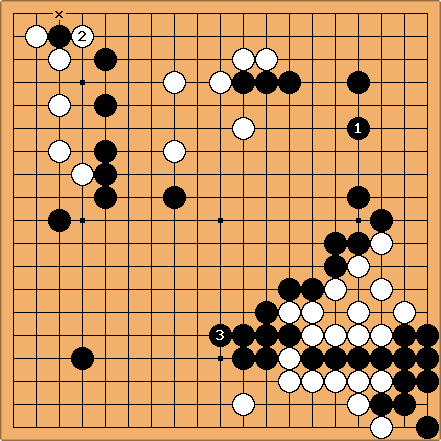 And black meekly answers white's impossible move with one of his own :)

These shots of seem to be shots of moves played earlier the game in the lower right corner therefore they are left out in the next diagram. 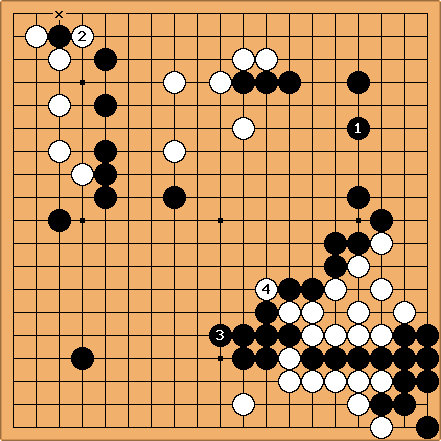 w4: cut! And that's the end of the first scene with go in it.

The continuation. Quite a few moves have been played in the mean time. We get to see a shot of the lower right looking like this. b3 from diagram 5 has gone missing, they must have realised it was a bad move ;) 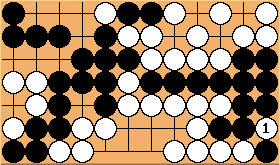 In the next go scene we get a nice talk on go:

Sol: "The ancient Japanese consider the go board to be a microcosm of the universe. Although at first, when it is empty, it appears to be simple and ordered, the possibilities of gameplay are endless. They say no two go games have ever been alike, just like snow flakes. So the go board actually represents an extremely complex and chaotic universe. And that is the truth of our world, Max. It can't be easily summed up with math, there is no simple pattern."

Max: "But as a go game progresses the possibilities become smaller and smaller, the board does take on order. Soon all the moves are predictable."

Max: "So maybe, even though we're not sophisticated enough to be aware of it, there is a pattern. An order. Underlying every go game!"

Later on in the movie we see a few more quick animated shots of a part of a go game. The positions are in the diagrams below.

a few moves were skipped 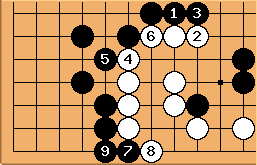 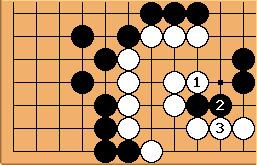 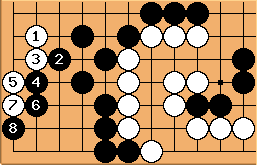 Yes, white gets to play 2 moves in a row in this sequence.

And last, but certainly not least. Max visits Sol's apartment to find that Sol has made a nice piece of go art with stones on the board. I've been thinking about this one a lot, and I think it is the ultimate game... if you look at it in the right way you can even find a 216 digit number in it!

Scartol: I just posted a 3D rendered version of this at 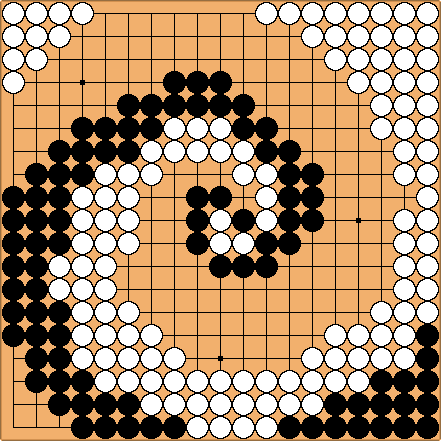