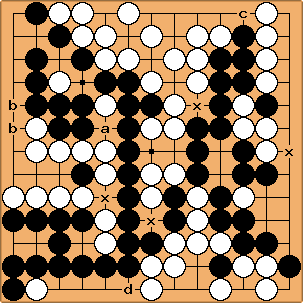 dnerra Here is how one could solve this problem in 15 seconds[1]: a and b are absolutely miai. Both are one point plays, gote by both, no follow-ups. This means: We can completely ignore them in our analysis. We never play there first, but when the opponent takes one point, we automatically take the other. The worst that can happen this way is that we don't punish a mistake of the opponent.

Not equally obvious is that c and d are also absolutely miai. They are both worth one point, but that is not enough: The whole tree of plays is exactly the same. So we ignore them too. So the only relevant moves are those marked x. We have to see how we can get to play tedomari, which here means we try to get the last move that is worth one point. And in fact, there is more then one way to achieve this: 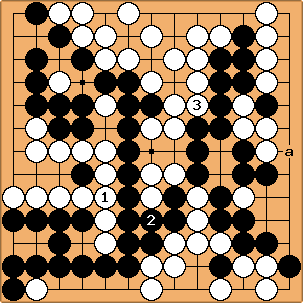 , the two points that are left are both reverse sente, and worth one point. White can just take one of them. (

could also be at a.) 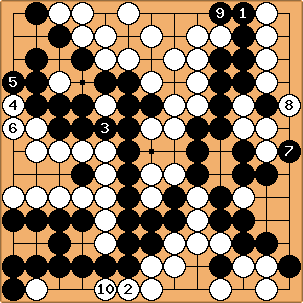 try to confuse matters, but White just blindly follows miai. [1] I did not solve this in 15 seconds. But after Arno's remark that the mutual damage plays are miai, I realized that one should be able to solve it in this time.

Bill: It is a wee bit harder. ;-) (Later): I put up failure diagrams on the solution page. Also see unkx80's diagrams below. 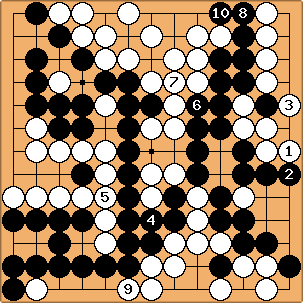 unkx80: I also thought that 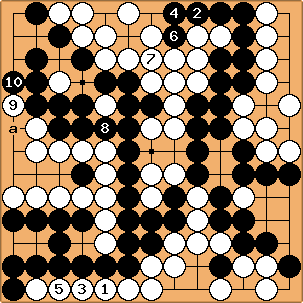 The reason is that

is actually a 3 point play, in that

is a 1 point sente move for Black. Finally, White connects at a, but loses the game.

has to play at

, which turns the game into jigo.