Bill: Picking up on an idea of Holigor's, how about studying a pro game backwards? Instead of 10 moves per page, I think that 30 is reasonable for this game. Given a week or so for comments, we should finish in about two months. Please join in the fun. :-) 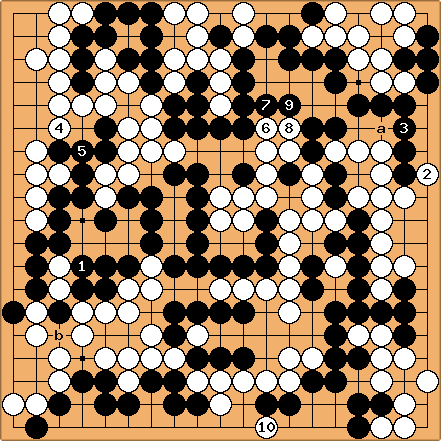 picks up 2 points in gote. Next,

at a (reverse sente) would gain 1/4 point more, but would allow

at b, which gains 2 points. But

is right, because it is the last play at the 2 level before a significant drop in temperature. See /Tedomari.

, which is an interesting play. 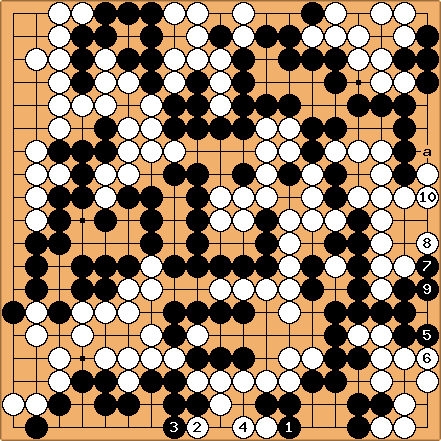 is strange, too, losing 1/2 point. (White gets it back by getting the last play, so the score is unaffected.) 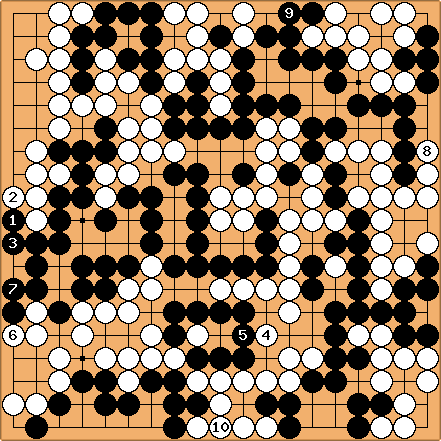 Bill: Black gets the last 1 point play (miai value), but it does not matter, because White gets the 1/2 point play.

Bill: My source for this ancient game says that the result is jigo, but it looks like a one point win for Black to me. Also, some of the play looks a little funny, as though the players were contesting a point that isn't there. Maybe the game record is not accurate. Or am I mistaken?

John F. There are indeed other versions of this game that give the result as B+1. The original exists only in MS form and that, plus age, opens up lots of possibilities of a corrupted record. There is a perhaps unusual number of jigos in this period, however, and given the circumstances, one must not discount the possibility that any funny moves might be explained by efforts to create a jigo (and if they missed the target they bluffed over the result???).