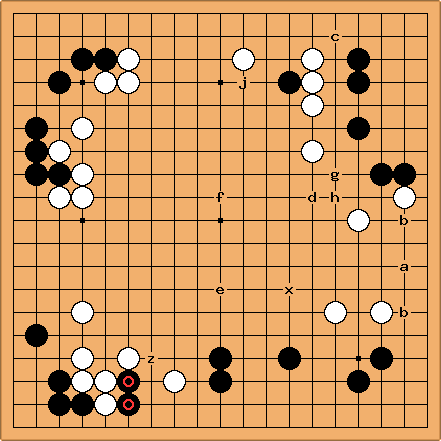 My rule of thumb ( do you have a better one?) The upper 4 lines of the moyo are solidly Whites. The rest is open to invasion but fairly closed. So I give about half of the points to White.

Andy Pierce: If it's white's turn to move (it isn't) then this game is much easier for white. With black to move, there are too many white weaknesses. I would probably start with x for black to expand the bottom with pressure before leaping into the center. White doesn't have any sure territory on the right. Black can place at a making b points miai. White also is going to have to spend a move sooner or later to deal with the aji of the

stones. White is going to find this very inconvenient. Then again, I've lost plenty of games as black with boards that look similar to this. :)

Alex: I think White is winning, regardless of whose turn it is. White is thick everywhere and Black's territories are not particularly huge. I think it's fair to count the top seven lines of White's moyo as solid territory, which gives about 55 points. Add in komi and White only needs about ten points around the rest of the board to win. Should not be hard at all to come up with that. As an aside, note that, although it's not quite time yet, c is a huge endgame move and both players should be looking for a chance to play it as soon as the value of moves in the centre drops into single digits.

kokiri - i don't disagree that black is behind, but I would not dispair if i had the black stones. The middle is looking ominous and black is going to have to play skilfully there, but first I would be sorely tempted to play c now though - either white answers and black keeps sente, or it will be well placed to reduce the top side of white's later on.

unkx80: I think White is leading. Although Black has all four corners, there is hardly any potential for Black to expand it, unlike the huge expansion potential White has. In fact, there are signs that Black has played submissively and low - the iron pillars are telltale signs. I don't think a Black move at c is sente, because White can ignore and continue to expand the framework at d or e. If I am Black, I may head straight at f.

zinger: Perhaps black can try g or h, trying to work his way into the center and making the four white stones below look a little thin. 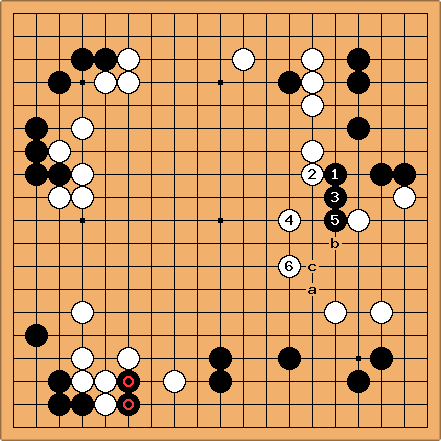 unkx80: Hmm... thought of this, but not sure whether White can actually play like this, treating the White stones on the right lightly, possibly sacrificing them?

Alex: Looks about right to me. After

, if Black wants to capture anything, he'll need to play at a, but then b looks good to me (as usual with my comments, this is mostly instinct, little reading - if b doesn't work, then White can still penetrate into that area of the board with c.) Anyway, White's moyo looks big enough to me that even if she has to give up 20 points or so in this area, she's still far ahead.

zinger: Hmmm, looks good. So that wasn't such a good idea :)

kokiri - this looks to me like the best possible result for white - black has not really won the battle on the right, but definitely lost the war. Looking back at the main diagram, giving white a wall on the right doesn't look like it can be in black's interest, even if he gains more territory

DrStraw: I would want to be playing B at this point. Because of the W weakness on the lower right I think B can get away with playing tengen at this point and then W does not have enough. The aji at z is also ominous once B is stable in the middle.

xela: It's no surprise that people's opinions were divided on this one. KataGo thinks it's about as close to equal as you can get, with only a fraction of a point between black and white (using the 20-block network published in 2019, 30k playouts). KataGo's first choice move is f (referring to the diagram at the top of this page), but one point above f or z instead get pretty much the same rating. Another interesting idea in this position is j, slightly inferior to the best moves, but it's hard for white to actually capture that stone.