This page is in need of attention.
Reason: the article is in discussion mode 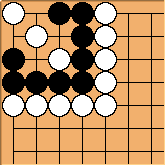 Black can play any of the internal points as a threat that loses nothing (leaving a position similar to the first diagram if White answers), whereas White cannot threaten anything. If a bent four in the corner happens in another corner, Black would feel cheated, under Japanese rules. Note that if you reversed the colours in the bent four in the corner diagram, you would need to reverse the colours in this diagram too, to create a similar situation for White.

cliftut; notice, though, that whoever plays first in this diagram can gain sente. If white plays one of the points first, black has to pick which is more important to him, filling in ko, or getting 10 points in the corner:

I hope I made sense. If not, say so and I'll try to make a diagram. As far as I can tell, though, my comment is valid, if only in very paticular situations(depending on who gains or loses more by winning ko, and exactly how much ko is worth to each player). I just wanted to show that this may not be completely 'one-sided'. If anyone can see a flaw in my logic, please point it out.

yong?: cliftut, you dont make sense, it is seki without white playing.

Jake: He means that black can play this as a ko threat, and white cannot play anything to negate that. Black plays, forcing white to play or black lives, while white can never play here first - assuming white responds to a play (ie threat) move by black, it does become/stay seki.

chewtonic: It is conceivable that Black's best play is to ignore a white move in the seki. For example if Black has no ko threats and the ko is worth more than 10 points. So Black wins the ko and white then plays a second stone in the seki. If stone counting is being used, this extra white stone could win the game. Of course if 2 dame exist elsewhere on the board, white could play there instead and the result would be the same.

theotherable?: In almost all cases of correct play black will ignore a white play here. I'm not even sure I can construct an example where he would play. For black to play, the ko has to be less than 10 points, or black wins anyway. This play by white is either a trick, a mistake, or a desperate attempt to get a ko threat. For example one situation where a white play here might be useful is a large 3 stage ko where black has 3 other large unremovable ko threats, and 2 white plays here make the third the 1 required ko threat. A black reponse to the first play makes it a ko threat, and makes the next play here another ko threat, so black should not repond to the first move.

theotherable?: Another interesting point about this position is that after black plays his ko threat to kill white, white then DOES have a ko threat here to kill black, though at the cost of 10 points. This means that for large 2 step ko fights, white can ignore this and use this later to build a threat of his own.

asmobia?: Here is another example:

asmobia? White has one unremovable KO threat. In addition, White can even gain some points after Black answers it.