Hey, Odin, fancy playing a game on this wiki page?

Hey, ratty, sounds funky, I'll take black since you're the better player...does this mean we'll have to score for ourselves? Eeek!

I'd imagine one of us will resign first...

(Comments on our general standard of play are welcome, but please remember we're both beginners!) 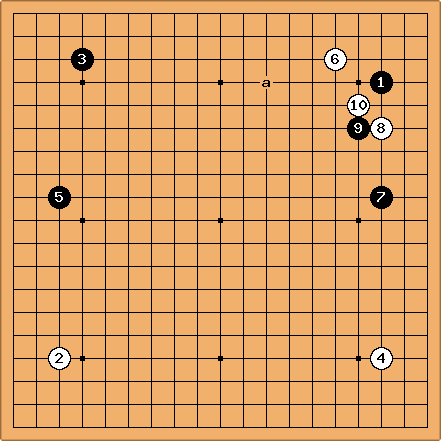 : Right, now I've surpassed my limited thoughts on what to do at the start of a game, I'm beginning to get a little edgey.... :-)

: what the hell am I doing, surely I should resign now? :) However, if you also don't know what you're doing...

: I'm sure I saw this on an SL page somewhere - probably bad though... I can just feel dan players shaking their heads at us...

: IanDavis I don't think anyone has pointed this out yet, but

seem to be in the wrong order. making the keima is a stadard defence here, it would eliminate the possibility of

I'd prefer to play a pincer, e.g. at 'a'. This would threaten

and build up Black's framework around the top right.

shows one way to deal with an attack from both sides: lean on one of the stones to build up strength, then attack the other. E.g. 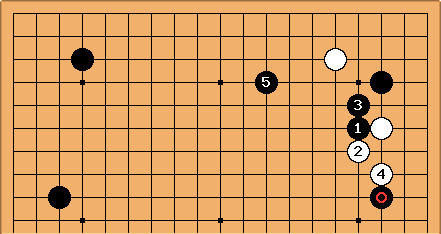 though, so it might be better to lean on the other stone instead: 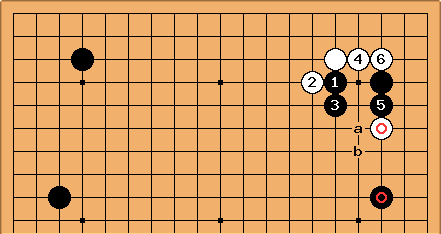 is nicely positioned to attack

Odin: Wow, that looks so much better than what I did, I assume black would be looking to play the next black stone at 'a' or would 'b' also be a reasonable choice????

Quacki: In this situation, I guess black would not like to play a or b, because this situation is quite settled. The marked white stone will be caught in the end of the game, unless something dramatic happens, because it cannot get away to the center or build a base. If black wants to play locally, I think a play to strengthen

should make life interesting for both players! 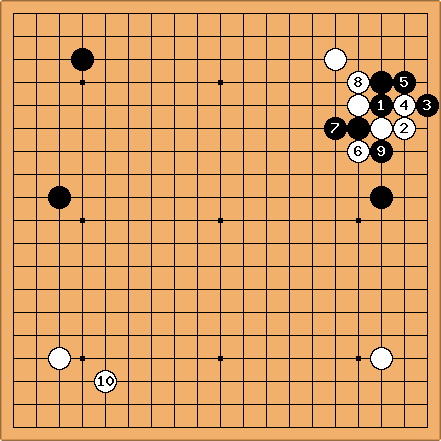 : Right so, good move/bad move? Never sure in this situation, when there's so much of the board left open, whether to carry on contesting the corner or just to try and surround a bit more territory....

PC: For what it's worth, I'd have played your move without much thought. If you let White play at 1 then all the White stones are practically connected while your stones are separated and weak. White will be able to make territory in the corner, along the right (by attacking your weak stones) and possibly along the top - playing a big move elsewhere isn't going to make up for all this.

: Right, I'm thinking this should help to curb those mean white pieces :-) I'd just like to thank PC here for all his comments on our game, it's nice of you to take the time.

: Yes PC - excellent to have you on board :) This move has slow written all over it, but surely

was a mistake that needs some punishing...

: I don't think it was a mistake to play

isn't a move I'd have played, as I can't see a good move for White in that direction. However, the

exchange has taken a liberty off White and strengthened Black in the corner, so it doesn't really punish

: Note that White could have captured this stone if he hadn't played the

exchange is not good, I do not agree with the "I told you so". I leave it as a reading exercise. =)

: Blimey - I've really learnt something today! Yes, of course you're allowed to say I told you so! I've moved to another corner to hang my head in shame...

PC: I didn't mean to imply that there's nothing interesting left to do in the corner. 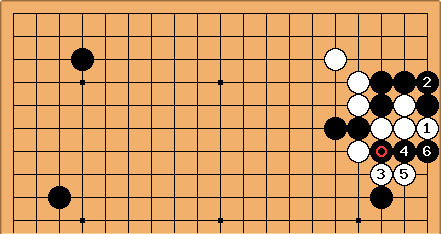 This sequence obviously doesn't work to capture the circled stone, can anyone else see what unkx80 is referring to? 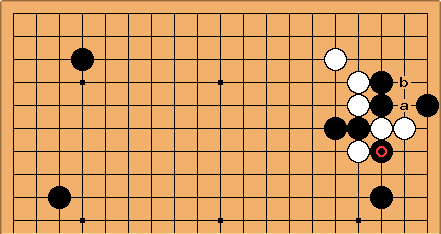 unkx80: Okay, my previous statement is phrased ambiguously. My claim is that without the White a and Black b exchange, it is still not possible to capture the

stone. Sorry for the misunderstanding. 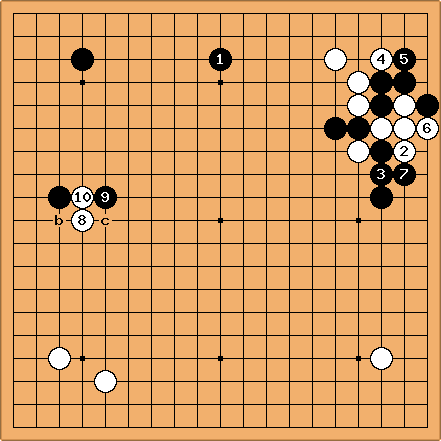 : Hey Eratos, don't listen to them hell they're only Dan players what would they know :-). LOL. Okay, all joking aside I'm sure I'll do plenty of things far worse as the game progresses. After all I haven't beaten you in a game so far have I?

: hmmm, not sure if this is going to end well for me.

: Now here's another position where the little voices in my head are screaming "WHERE DO I PLAY!!!". I considered playing at 'a' or 'b' instead, but I suspect some bright Dan player out there will tell me something like 'c' is far better. HELP!!!

Rich: a or b would have been good, standard plays. A simple extension is often good when someone plays next to you.

PC: Incidentally, 'c' would be really bad. White would still play at 10 and Black would have two separated stones, both with only three liberties.

is a little better but still leaves a gap for White to push through.

: (At a) I'm thinking about trying to keep these stones apart.

PC: Absolutely. Just compare this to letting Black play here: Black would have a nice strong wall and

would be very weak. 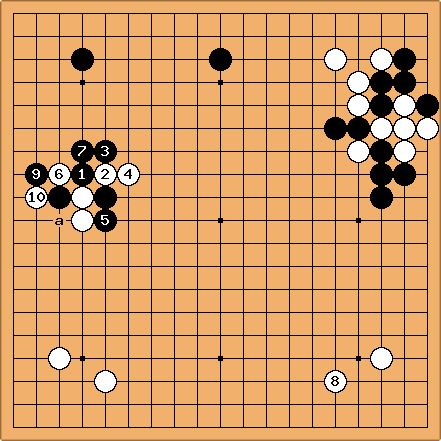 . It leaves cutting points, but at least it forces White to hack his way through. Playing 'a' would let White play at 1, completely cutting off a Black stone while leaving no White weaknesses.

: You guys like to live dangerously, don't you? :-) Odin? We certainly try :-) You should see some of our other games, if it wasn't for the fact that we both make the same number of hideously bad errors and unwarranted invasions, one of us would be in a lot of trouble. :-)

Eratos I'm not sure, come to think of it, that we know how to live safely, without gross underplays that is. I think we're still trying to find the balance between safety and aggression.

(replacing an earlier a mark) seems to have merit

: When is the right time to make a shimari?

PC: A relevant proverb is "urgent points before big points". A shimari is an example of a big point in this sense, whereas a move that settles a weak group would be an urgent point. Urgent points don't have the obvious immediate effect on the score that big points have, but their indirect effects (e.g. preventing your opponent building territory by attacking your weak group) can be large.

: Right so, I don't know anything about fancy words, and I probably should have made a bigger move, but this gives me a warm fuzzy feeling inside, so I'm sticking with it.

would have been the proverbial urgent point then?

PC: Yes. 'a' would have been my choice 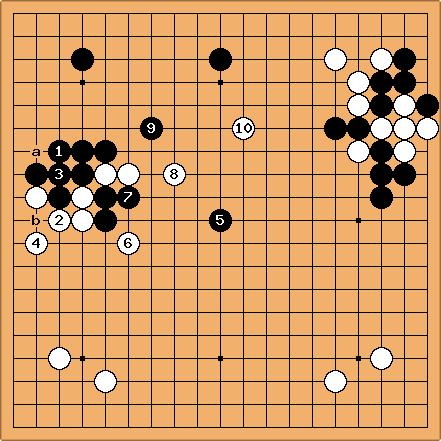 : Black is on holiday at the moment, hence page updates have slowed down a lot ;)

strengthen the respective positions, but in both cases the other side would have needed a couple of moves to do any real damage. E.g. if black omitted

, White would have to capture and then cut at 'a'.If White omits

and Black cuts at 'b', White can play atari and then decide whether to defend (e.g. at 'a' below). Note that after this sequence

in the game are doing almost no work. 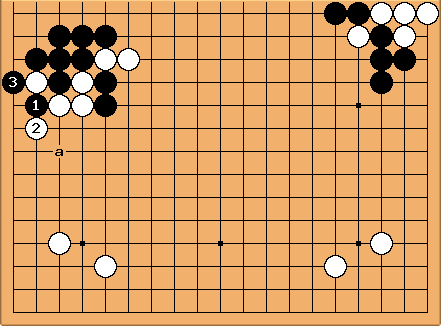 : Right, have had a lovely holiday in greece, time for stupid moves :-)

: Now I know there's this whol thing about not making empty triangles, but hell I'm screwed either way, so I'm trying this :-)

: Has it really been that long since I moved? Blimey. Must remind my opponent that the game is still here... 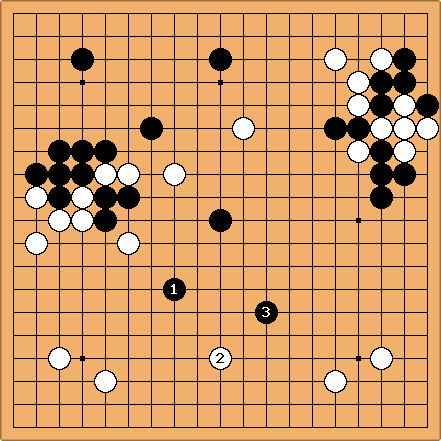