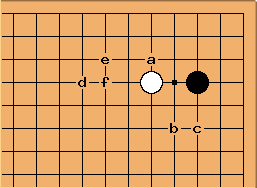 Dieter: To my knowledge, most amateurs will invite easy joseki by playing a or b. Players with a sense of whole board thinking will sometimes shift to the low move at c. More adventurous players will pincer at d, e or f, with decreasing popularity, either led by whole board thinking or by lust for battle. 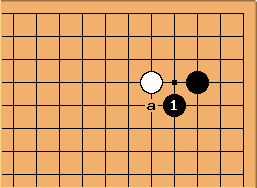 . However, a beginner could easily come up with this move. As a matter of fact, experienced players could mistake this move for some kind of Shusaku kosumi. While this move will be dismissed as noseki and a violation of basic instinct, what's so bad about it ?

(5 kyu analysis warning): It seems slow. It doesn't have to be bad necessary, but a succession of small sub-optimal moves will lose the game. In a pro game, maybe one sub-optimal move loses the game. If white wants to keep playing here, what about a play at a? This seems to make the black stones look silly. 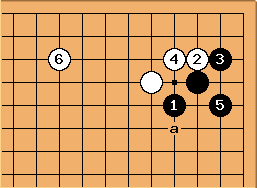 Let's imagine the well known continuation despite the "wrong" first move. How much worse is this result than if Black's stone were at a and why ? Myself, as a 2d, I think Black's development at the right side would be faster and equally safe with a but I can't express it in points.

In a sly mood, I could play this move to have the other player think he's leading by a lot so that he will start playing slack moves later. 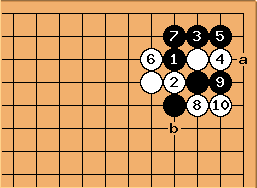 This surprising cut is only one of the many variations one can think of. Black 11 is at a and White captures in a ladder at b. However, this ladder may not work and Black's noseki is a success. 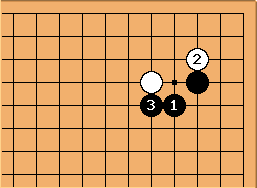 transposes to joseki, which normally goes