This situation arose in New Year's Rengo 2002 after White played 50 at 2 in the diagram below:

I think White 50 should be at a (the marked stone in the diagram below), which is almost sente. To play now in the upper left corner is too small. Lucky
dnerra: Can you explain a little (I played White 50)? I see now that White a isn't sente, but how could it then have been sente at White 50? I.e., what would be the follow-up to White 50 at a?

So what happens if White 50 is played at the marked stone below? 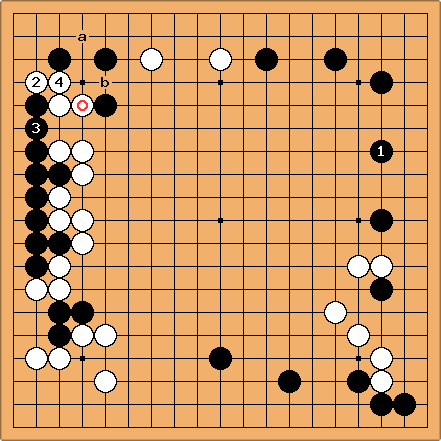 Lucky: I'll try to explain what I am thinking. First I should say that White 50 in the game is not absolutely wrong, it's not a mistake. But it's too easy-going and reveals some simple logic, 'if it's sente why not play it?' Not all sente moves should be played immediately because sometimes they destroy some more interesting continuations (which may become possible only later). 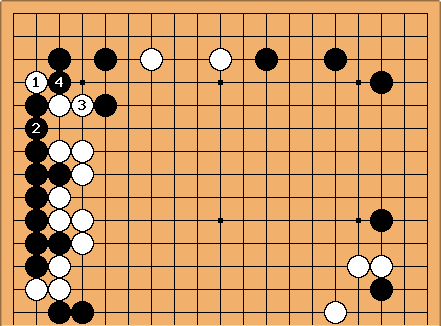 In the game White had already made the White 1 - Black 2 exchange. It is OK to continue with White 3; suppose Black answers with Black 4. Now the exchange White 1 - Black 2 becomes a two- or three-point loss for White. Also Black is stronger (think about the position without White 1-Black 2). 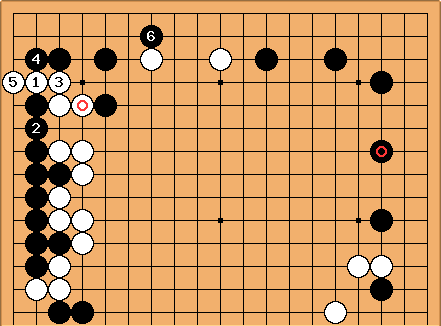 White 1 and 3 are one possible action, I think not very attractive right now. Black is alive on the left side and defends the corner with Black 4 and Black 6. He will not die. 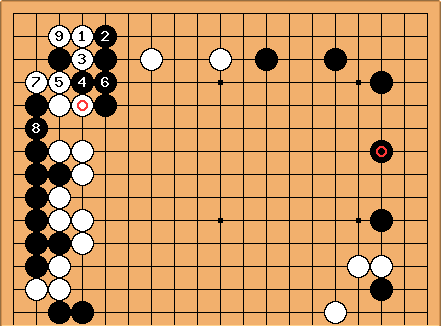 I was thinking about playing directly at White 1. Black 2 is out of the question. 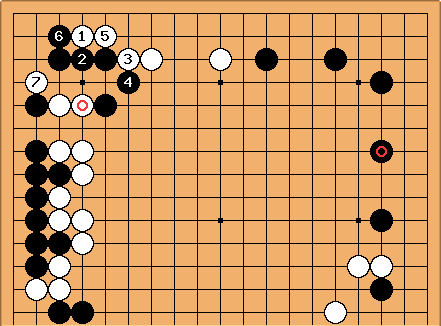 So Black should play something like Black 2. White then strengthens his upper side group with White 3 - White 5. If Black 6 next, White plays 7 and Black's corner group has no eyes. Probably Black will connect with the left side (playing where the White 7 stone is) but White has a very big yose play in the corner next. 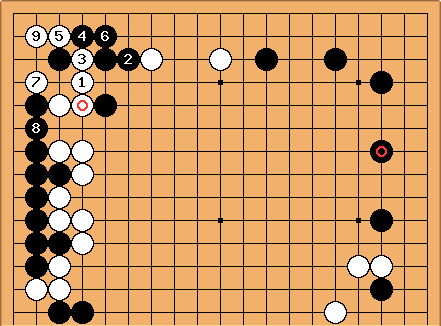 Another nice variation is to play White 1 directly. This still seems possible.

I said the white connection is 'almost sente' because is not completely sente. Black can play tenuki. But then White has a very good sente follow-up :) Noticeably bigger than Black's play on the right. Now I've spoiled the game :)