Move one space further with snapback

The motto move one space further with snapback means one can use the threat of a snapback to make a larger encroachment along the edge upon enemy territory than a more vulgar move achieves. This can be useful in life and death and in the endgame. 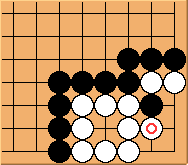 Black to play and kill 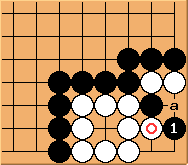 If White a, black will capture three stones with snapback. 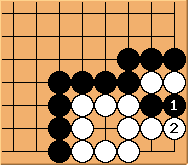 Because he did not threaten a snapback, Black could not get far enough in to hurt Whites eyespace.

In the endgame, the same technique increases ones profit and helps retain sente.

This is the solution. Note the snapback of

in the previous diagram, White is more likely to be able to make a sente yose play of his own before playing