How to stop the Monkey Jump

The correct White response to

WTD: In Monkey Jump Workshop by Richard Hunter, c is generally dismissed as a reply to the jump, because it loses points unnecessarily. I don't think it should be considered unless special circumstances apply, such as the invader exploiting a gap in the defenders formation, or forming a separate live group.

axd: so the diagram 'Correct sequence' above, which says 'c' is the correct reply, is then no more than a "special circumstance"?

Bill: I am far from sure, but e might be right. It's complicated. Anyway, e is one of the standard responses.

Karl Knechtel: It is? I've never seen that...

You should try to read out the answer precisely, as you should neither give up two points, nor lose the game by producing one of the catastrophic failures we have seen above.

Try out your reading in the Monkey Jump Problem Series.

Examples illustrating the rule of thumb above follow below:

is played at e, in '10 point monkey jump' (above), the result is 2 points better for White. This can also be achieved if White replies to the monkey jump at

rz: I don't understand why in this diagram, black cannot play 6 instead of 3, putting 4 into atari

kl: it is because white could then play 3. Black cannot survive during the subsequent fight with fewer "breath".

It comes down to whether Black can capture

or not. With the squared white stone,

The response at e

In this case, the first line block is half a point better, so long as Black can't play at b.

In this game there are three monkey jumps, each answered in a different way. 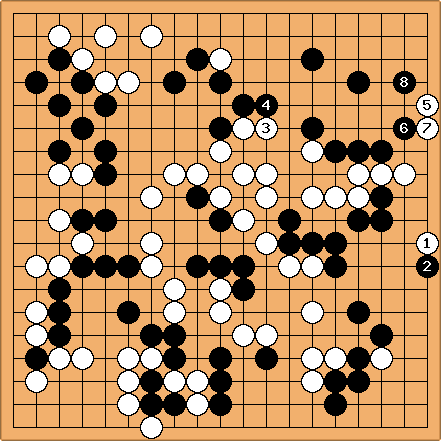 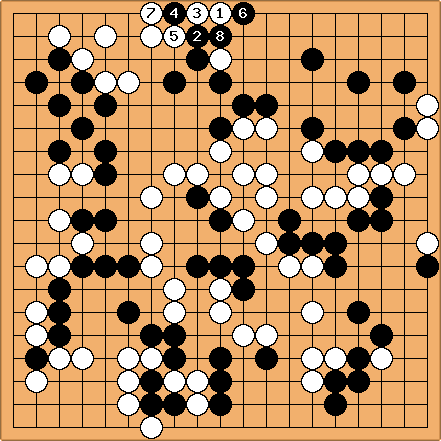 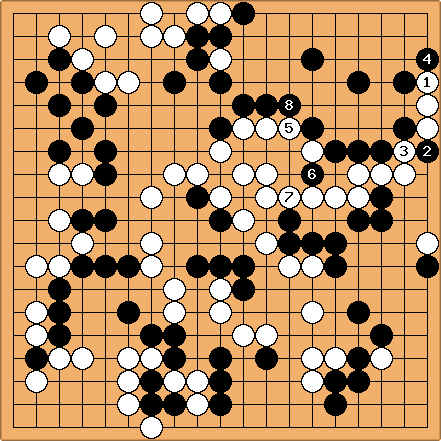 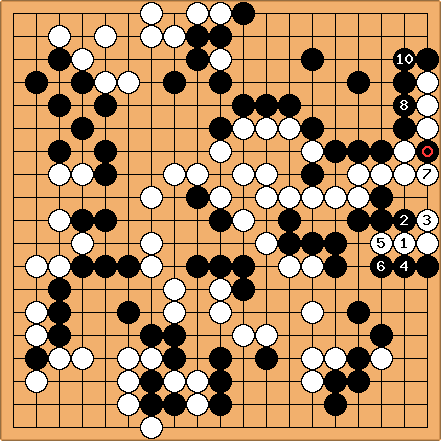 [1] dnerra: These values assume that White's hane, after preventing the monkey jump by a block on the second line, would be sente.